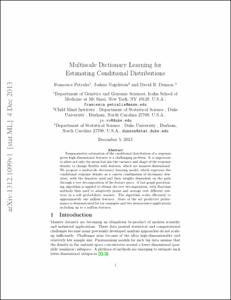 View / Download
657.2 Kb
Date
Authors
Petralia, F
Vogelstein, J
Dunson, DB
Repository Usage Stats
71
views
22
downloads
Abstract
Nonparametric estimation of the conditional distribution of a response given highdimensional features is a challenging problem. It is important to allow not only the mean but also the variance and shape of the response density to change flexibly with features, which are massive-dimensional. We propose a multiscale dictionary learning model, which expresses the conditional response density as a convex combination of dictionary densities, with the densities used and their weights dependent on the path through a tree decomposition of the feature space. A fast graph partitioning algorithm is applied to obtain the tree decomposition, with Bayesian methods then used to adaptively prune and average over different sub-trees in a soft probabilistic manner. The algorithm scales efficiently to approximately one million features. State of the art predictive performance is demonstrated for toy examples and two neuroscience applications including up to a million features.
Type
Journal article
Permalink
https://hdl.handle.net/10161/15600
Collections
More Info
Show full item record