The Afterlives of King Philip's War: Negotiating War and Identity in Early America 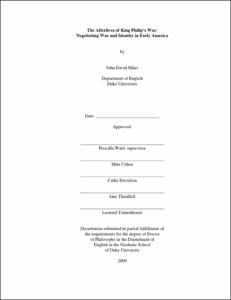 "The Afterlives of King Philip's War" examines how this colonial American war entered into narratives of history and literature from the seventeenth to the nineteenth centuries, and investigates how narrative representations of the War restructured both genre and the meaning of the historical event itself. This investigation finds its roots in colonial literature and history - in the events of King Philip's War and the texts that it produced - but moves beyond these initial points of departure to consider this archive as a laboratory for the study of the relationship between genre and knowledge on one hand, and literature and the construction of (proto-) national community on the other. Because of its unique place in the history of the colonies, as well as its positioning within literary studies of Puritan New England, King Philip's War is an example not just of how one community faced a crisis of self-definition, but how that crisis was influenced by, and in turn is reflected in, the literature it produced. In this conception, genre is more than literary form, but represents a social technology with implications for the broader production of knowledge: following the use and production of genre in narrative reveals both literary history and the complicated map of how narrative constructs knowledge in tension with the conventions of genre simultaneously hem in and catalyze reading.