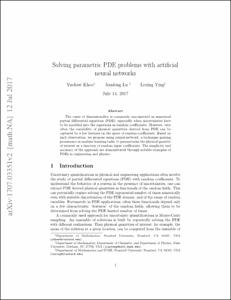 View / Download
410.9 Kb
Date
Authors
Khoo, Y
Lu, J
Ying, L
Repository Usage Stats
178
views
120
downloads
Abstract
The curse of dimensionality is commonly encountered in numerical partial differential equations (PDE), especially when uncertainties have to be modeled into the equations as random coefficients. However, very often the variability of physical quantities derived from PDE can be captured by a few features on the space of random coefficients. Based on such observation, we propose using neural-network, a technique gaining prominence in machine learning tasks, to parameterize the physical quantity of interest as a function of random input coefficients. The simplicity and accuracy of the approach are demonstrated through notable examples of PDEs in engineering and physics.
Type
Journal article
Subject
math.NA
math.NA
65Nxx
Permalink
https://hdl.handle.net/10161/15784
Collections
More Info
Show full item record