Task-related changes in degree centrality and local coherence of the posterior cingulate cortex after major cardiac surgery in older adults. 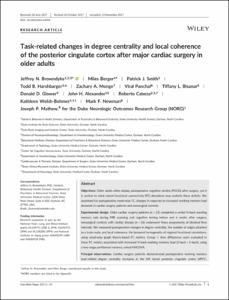 Associate Professor in Psychiatry and Behavioral Sciences
Dr. Smith is interested in the impact of lifestyle interventions, such as diet and exercise, on neurocognitive function and mood. He has also published multiple studies examining the relationship between cardiovascular disease, major depressive disorder, and neurocognitive outcomes, preoperative predictors of postoperative delirium, the impact of cardiothoracic interventions on neurocognitive outcomes, and the relationship between patterns of dietary intake and cardiovascular outcomes. He is als Professor in Psychiatry and Behavioral Sciences
Dr. Kathleen Welsh-Bohmer is a Professor of Psychiatry with a secondary appointment in the Department of Neurology.   Clinically trained as a neuropsychologist, Dr. Welsh-Bohmer's research activities have been focused around developing effective prevention and treatment strategies to delay the onset of cognitive disorders occurring in later life.  From 2006 through 2018 she directed the Joseph and Kathleen Bryan Alzheimer’s Center
More Authors
Alphabetical list of authors with Scholars@Duke profiles.