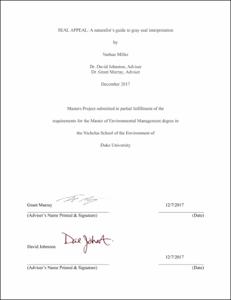 View / Download
7.3 Mb
Date
Author
Miller, Nathan
Advisors
Johnston, David
Murray, Grant Daniel
Repository Usage Stats
212
views
3,753
downloads
Abstract
Gray seals (Halichoerus grypus) are a large phocid species of pinniped found in coastal waters encircling the North Atlantic Ocean. In the Western Atlantic, large concentrations of gray seals can be found in New England – Cape Cod in particular – as well as Sable Island off the coast of Nova Scotia. Whereas gray seals were nearly extirpated from New England by the 1950’s after centuries of both commercial exploitation and targeted bounty programs, U.S. federal laws protecting all marine mammals since the 1970’s have allowed gray seals to recover to population sizes not seen in over 200 years. Currently, between 30,000-50,000 gray seals permanently reside in Cape Cod alone. Gray seals have provided economic opportunity as well as a new avenue through which to educate the public about the significance of marine mammal conservation. There are currently five seal cruise businesses in Cape Cod and Nantucket that ferry visitors, eager to see and learn about marine wildlife, to and from gray seal haul outs. Peak season for seal cruises occurs between mid-summer and early-fall; they last for about two hours and are afforded the backdrop of (ideally) warm sunny weather in addition to beautiful coastal scenery. Seal cruise captains, operators, and guides also spend a significant portion of their time during each cruise offering information about gray seals, the state of Cape Cod’s marine ecosystem, and general history of Cape Cod. Given that they occur in a non-formal setting and appeal to visitors who elect to spend their free time learning about marine life, seal cruises are an ideal scenario in which interpretive communication techniques might help enhance conservation messaging as well as the overall visitor experience during a seal cruise. Interpretation is a form of communication best suited for non-formal education settings where the information presented all serves to directly strengthen a specific message or theme. Programs that apply interpretation are highly structured in their presentation of information, making the program content easy to follow, they strive to make their information relevant to the lives of individual audience members, and they seek to maintain an audience’s attention by being enjoyable. Peer-reviewed research also makes a strong argument for the use of interpretation in environmental education settings. Visitors who participate in programs such as guided tours or museum exhibits are more likely to retain information they hear or read if that program incorporates interpretation into its communication strategy. The most successful environmental programs that use interpretation can even influence visitors to make more environmentally conscious decisions after the program has concluded. The objective of this project, considering this background, was to design products that would help interested seal cruise businesses integrate interpretation into their operations. The first of two products presented in this report consists of a new digital guide offering materials and techniques for seal cruises to achieve such integration. This guide is divided into three sections. The first section includes a summary of what interpretation is, why it might be useful to an ecotourism business, and how interpretation can further encourage public support for conservation initiatives. The second section outlines how interpreters design themes and theme statements, the importance of content structure for a cruise, and how to hold an audience’s attention. The third section covers responsible conduct at sea, including keeping visitors safe while on board and how to minimize potential harassment of marine wildlife during the cruise. The guide also provides fact sheets that cover topics such as mammalogy, gray seal physiology, and community concerns surrounding gray seals (i.e.: human/seal interactions, seal waste and water quality, and shark predation on seals). The second of the two products is a literature review of the history of sealing and seal conservation in New England from the colonial era to the present day. Though literature on this topic is limited, especially for the years prior to the 1880’s, what literature does exist paints a timeline where in the 1600’s gray seals resided from Labrador, Canada to Cape Hatteras, North Carolina in the hundreds of thousands. By the 18th century, gray seals in the 13 colonies/United States were decimated because of the commercial exploitation of their blubber. Bounties lasting from the 1880’s until 1962 further reduced the number of gray seals in New England to near zero. It wasn’t until the ratification of the Marine Mammal Protection Act of 1972 when gray seals were afforded the federal protections required to recover to the population sizes seen today. Both products are the result of extensive research using a variety of sources, including, but not limited to, peer-reviewed literature, popular historical literature, academic textbooks, government reports, economic reports, and newspaper archives. Interviews with seal cruise operators were also conducted to learn how they present information to visitors, whether they incorporate audience participation, and any conservation messages they may already have. This guide has not been field tested, meaning a study assessing how affective it is at integrating interpretation is still unknown and would require further research.
Type
Master's project
Department
Nicholas School of the Environment and Earth Sciences
Subject
Interpretation
Marine Mammal Conservation
Seal
Gray Seal
Marine Mammal
New England
Permalink
https://hdl.handle.net/10161/15827
Citation
Miller, Nathan (2017). SEAL APPEAL: A naturalist's guide to gray seal interpretation. Master's project, Duke University. Retrieved from https://hdl.handle.net/10161/15827.
Collections
More Info
Show full item record