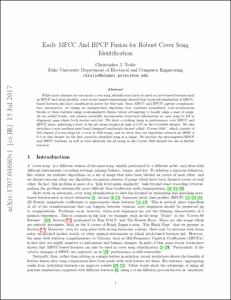 View / Download
2.1 Mb
Date
Author
Tralie, CJ
Repository Usage Stats
99
views
42
downloads
Abstract
While most schemes for automatic cover song identification have focused on note-based features such as HPCP and chord profiles, a few recent papers surprisingly showed that local self-similarities of MFCC-based features also have classification power for this task. Since MFCC and HPCP capture complementary information, we design an unsupervised algorithm that combines normalized, beat-synchronous blocks of these features using cross-similarity fusion before attempting to locally align a pair of songs. As an added bonus, our scheme naturally incorporates structural information in each song to fill in alignment gaps where both feature sets fail. We show a striking jump in performance over MFCC and HPCP alone, achieving a state of the art mean reciprocal rank of 0.87 on the Covers80 dataset. We also introduce a new medium-sized hand designed benchmark dataset called "Covers 1000," which consists of 395 cliques of cover songs for a total of 1000 songs, and we show that our algorithm achieves an MRR of 0.9 on this dataset for the first correctly identified song in a clique. We provide the precomputed HPCP and MFCC features, as well as beat intervals, for all songs in the Covers 1000 dataset for use in further research.
Type
Journal article
Subject
cs.IR
cs.IR
cs.SD
H.5.5
Permalink
https://hdl.handle.net/10161/15840
Collections
More Info
Show full item record