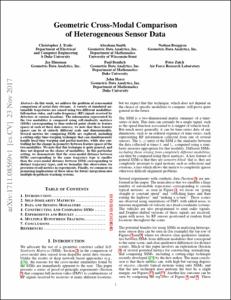 View / Download
4.8 Mb
Date
Authors
Tralie, CJ
Smith, A
Borggren, N
Hineman, J
Bendich, P
Zulch, P
Harer, J
Repository Usage Stats
254
views
134
downloads
Abstract
In this work, we address the problem of cross-modal comparison of aerial data streams. A variety of simulated automobile trajectories are sensed using two different modalities: full-motion video, and radio-frequency (RF) signals received by detectors at various locations. The information represented by the two modalities is compared using self-similarity matrices (SSMs) corresponding to time-ordered point clouds in feature spaces of each of these data sources; we note that these feature spaces can be of entirely different scale and dimensionality. Several metrics for comparing SSMs are explored, including a cutting-edge time-warping technique that can simultaneously handle local time warping and partial matches, while also controlling for the change in geometry between feature spaces of the two modalities. We note that this technique is quite general, and does not depend on the choice of modalities. In this particular setting, we demonstrate that the cross-modal distance between SSMs corresponding to the same trajectory type is smaller than the cross-modal distance between SSMs corresponding to distinct trajectory types, and we formalize this observation via precision-recall metrics in experiments. Finally, we comment on promising implications of these ideas for future integration into multiple-hypothesis tracking systems.
Type
Journal article
Subject
cs.CV
cs.CV
I.5.4; I.4.9; J.2
Permalink
https://hdl.handle.net/10161/15844
Collections
More Info
Show full item record Associate Research Professor of Mathematics
I am a mathematician whose main research focus lies in adapting theory from ostensibly pure areas of mathematics, such as topology, geometry, and abstract algebra, into tools that can be broadly used in many data-centeredapplications.My initial training was in a recently-emerging field called topological data analysis (TDA). I have beenresponsible for several essential and widely-used elements of its theoretical toolkit, with a particularfocus on building TDA methodology Professor of Mathematics
Professor Harer's primary research is in the use of geometric, combinatorial and computational techniques to study a variety of problems in data analysis, shape recognition, image segmentation, tracking, cyber security, ioT, biological networks and gene expression.