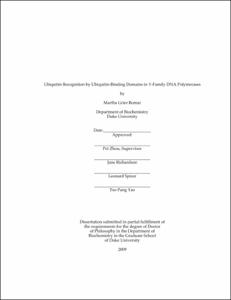 Translesion synthesis (TLS) is a specialized type of DNA repair for bypassing DNA damage at the stalled replication fork. Because the TLS polymerases (mainly from the Y-family of polymerases) are characterized by more open active sites in order to accommodate the lesions, they are inherently more mutagenic than the replicative polymerases. Although essential for cell survival and in tolerating DNA damage, the access of the TLS polymerases to the replication fork must be tightly controlled. This regulation occurs in part through the ubiquitination state of the processivity factor PCNA. Damage-induced monoubiquitination of PCNA serves in part as the regulatory switch between replicative and translesion polymerases. Highly conserved ubiquitin-binding domains, the ubiquitin-binding zinc finger (UBZ) domain and the ubiquitin-binding motif (UBM), within the C-termini of the Y-family polymerases provide for an increased affinity of the polymerases to PCNA after damage to promote TLS. In order to determine the molecular basis for ubiquitin recognition by the TLS polymerases, we solved the solution structures of the human pol &#951; UBZ domain, the human pol &#953; UBM2 domain, and the human pol &#953; UBM2-ubiquitin complex.

The UBZ domain adopts a classical C2H2 zinc finger structure characterized by a &#946;&#946;&#945; fold, similar to the DNA-binding zinc finger proteins. Nuclear magnetic resonance titration mapped the binding interfaces between UBZ and ubiquitin to the &#945;-helix of the UBZ domain and the canonical hydrophobic surface of ubiquitin defined by residues L8, I44 and V70. Although the UBZ domain binds ubiquitin through a single &#945;-helix, in a manner similar to the inverted ubiquitin-interacting motif, its structure is distinct from previously characterized ubiquitin-binding domains. The pol &#951; UBZ domain represents a novel member of the C2H2 zinc finger family that interacts with ubiquitin to regulate translesion synthesis.

We also investigated the structural elements and mechanism of ubiquitin recognition of the ubiquitin-binding motif (UBM) found in pol &#953; and Rev1. The solution structures of the C-terminal UBM of human pol &#953; and its complex with ubiquitin were solved. The UBM is a novel ubiquitin-binding domain that binds to the hydrophobic surface of ubiquitin centered at L8. Accordingly, mutation of L8A, but not I44A of ubiquitin abolishes UBM binding. Human pol &#953; contains two functional UBMs, both of which contribute to replication foci formation. In contrast, only the second UBM of <italic>Saccharomyces cerevisiae</italic> Rev1 binds to ubiquitin and is essential for Rev1-dependent cell survival and mutagenesis. Point mutations impairing the UBM-ubiquitin interaction also disrupt foci formation of pol &#953; and the DNA damage response of Rev1 <italic>in vivo</italic>, showing the significant role for the UBM in regulating TLS.