Beyond the labeled line: variation in visual reference frames from intraparietal cortex to frontal eye fields and the superior colliculus 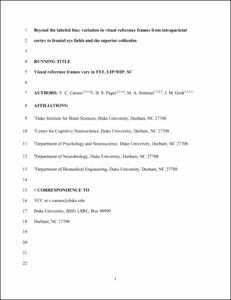 View / Download
831.6 Kb
Date
Authors
Caruso, Valeria C
Pages, Daniel S
Sommer, Marc A
Groh, Jennifer M
Repository Usage Stats
250
views
202
downloads
Abstract
We accurately perceive the visual scene despite moving our eyes ~3 times per second, an ability that requires incorporation of eye position and retinal information. In this study, we assessed how this neural computation unfolds across three interconnected structures: frontal eye fields (FEF), intraparietal cortex (LIP/MIP), and the superior colliculus (SC). Single unit activity was assessed in head-restrained monkeys performing visually-guided saccades from different initial fixations. As previously shown, the receptive fields of most LIP/MIP neurons shifted to novel positions on the retina for each eye position, and these locations were not clearly related to each other in either eye- or head-centered coordinates (defined as hybrid coordinates). In contrast, the receptive fields of most SC neurons were stable in eye-centered coordinates. In FEF, visual signals were intermediate between those patterns: around 60% were eye-centered, whereas the remainder showed changes in receptive field location, boundaries, or responsiveness that rendered the response patterns hybrid or occasionally head-centered. These results suggest that FEF may act as a transitional step in an evolution of coordinates between LIP/MIP and SC. The persistence across cortical areas of mixed representations that do not provide unequivocal location labels in a consistent reference frame has implications for how these representations must be read-out.
Type
Journal article
Permalink
https://hdl.handle.net/10161/15921
Published Version (Please cite this version)
10.1152/jn.00584.2017
Publication Info
Caruso, Valeria C; Pages, Daniel S; Sommer, Marc A; & Groh, Jennifer M (2017). Beyond the labeled line: variation in visual reference frames from intraparietal cortex to frontal eye fields and the superior colliculus. Journal of Neurophysiology, In Press. 10.1152/jn.00584.2017. Retrieved from https://hdl.handle.net/10161/15921.
This is constructed from limited available data and may be imprecise. To cite this article, please review & use the official citation provided by the journal.
Collections
More Info
Show full item record