Ipilmumab and cranial radiation in metastatic melanoma patients: a case series and review. 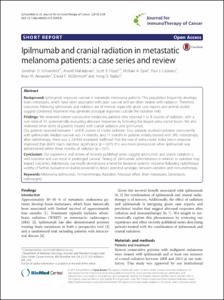