The role of whole brain radiation therapy in the management of melanoma brain metastases. 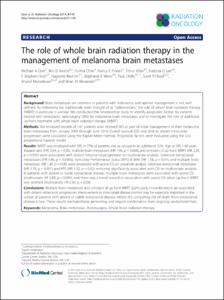