Are quit attempts among U.S. female nurses who smoke different from female smokers in the general population? An analysis of the 2006/2007 tobacco use supplement to the current population survey. 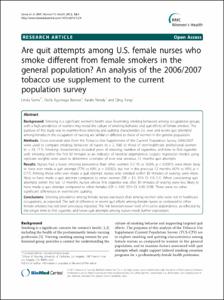 View / Download
235.6 Kb
Date
Authors
Sarna, Linda
Bialous, Stella Aguinaga
Nandy, Karabi
Yang, Qing
Repository Usage Stats
395
views
16
downloads
Abstract
BACKGROUND: Smoking is a significant women's health issue. Examining smoking behaviors among occupational groups with a high prevalence of women may reveal the culture of smoking behavior and quit efforts of female smokers. The purpose of this study was to examine how smoking and quitting characteristics (i.e., ever and recent quit attempts) among females in the occupation of nursing are similar or different to those of women in the general population. METHODS: Cross-sectional data from the Tobacco Use Supplement of the Current Population Survey 2006/2007 were used to compare smoking behaviors of nurses (n = 2, 566) to those of non-healthcare professional women (n = 93, 717). Smoking characteristics included years of smoking, number of cigarettes, and time to first cigarette with smoking within the first 30 minutes as an indicator of nicotine dependence. Logistic regression models using replicate weights were used to determine correlates of ever and previous 12 months quit attempts. RESULTS: Nurses had a lower smoking prevalence than other women (12.1% vs 16.6%, p < 0.0001); were more likely to have ever made a quit attempt (77% vs 68%, p = 0.0002); but not in the previous 12 months (42% vs 43%, p = 0.77). Among those who ever made a quit attempt, nurses who smoked within 30 minutes of waking, were more likely to have made a quit attempt compared to other women (OR = 3.1, 95% CI: 1.9, 5.1). When considering quit attempts within the last 12 months, nurses whose first cigarette was after 30 minutes of waking were less likely to have made a quit attempt compared to other females (OR = 0.69, 95% CI: 0.49, 0.98). There were no other significant differences in ever/recent quitting. CONCLUSIONS: Smoking prevalence among female nurses was lower than among women who were not in healthcare occupations, as expected. The lack of difference in recent quit efforts among female nurses as compared to other female smokers has not been previously reported. The link between lower level of nicotine dependence, as reflected by the longer time to first cigarette, and lower quit attempts among nurses needs further exploration.
Type
Journal article
Subject
Adolescent
Adult
Age of Onset
Cross-Sectional Studies
Female
Humans
Logistic Models
Middle Aged
Nurses
Prevalence
Smoking
Smoking Cessation
Time Factors
United States
Women's Health
Young Adult
Permalink
https://hdl.handle.net/10161/15988
Published Version (Please cite this version)
10.1186/1472-6874-12-4
Publication Info
Sarna, Linda; Bialous, Stella Aguinaga; Nandy, Karabi; & Yang, Qing (2012). Are quit attempts among U.S. female nurses who smoke different from female smokers in the general population? An analysis of the 2006/2007 tobacco use supplement to the current population survey. BMC Womens Health, 12. pp. 4. 10.1186/1472-6874-12-4. Retrieved from https://hdl.handle.net/10161/15988.
This is constructed from limited available data and may be imprecise. To cite this article, please review & use the official citation provided by the journal.
Collections
More Info
Show full item record Assistant Professor in the School of Nursing
Dr. Qing Yang is Assistant Professor and faculty statistician at Duke School of Nursing. She received her PhD in Biostatistics from University of California, Los Angeles. Dr. Yang’s statistical expertise is longitudinal data analysis and time-to-event data analysis. As a biostatistician, she has extensive experience collaborating with researchers in different therapeutic areas, including diabetes, cancer, cardiovascular disease and mental health. Her current research interests are intensiv