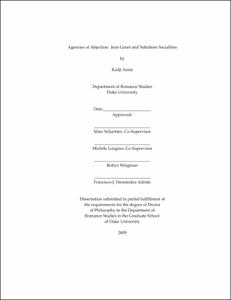 This dissertation explores the concept of <italic>agential abjection</italic> through Jean Genet's involvement with and writings about the struggles of disenfranchised and pathologized peoples. Following Julia Kristeva, Judith Butler has argued that modern subjectivity requires the production of a domain of abjected beings denied subjecthood and forced to live "unlivable" lives. "Agencies of Abjection" brings these feminist theories of abjection to bear on the multiple coordinates of social difference by exploring forms of abjection linked to sexuality, criminality, colonialism, and racialization. Situating Genet within an archive that includes the writings of former inmates of penal colonies, Francophone intellectuals, and Black Panther Party members, I analyze both the historical forces that produce abjection and the collective forms of agency that emerge from subaltern social forms. I find that the abjected are often able to elaborate impure, perverse, and contingent forms of agency from within the very institutions and discourses that would deny them subjecthood.

"Agencies of Abjection" carefully situates Genet's writing within the discursive fields in which it intervenes, including that of the memoirs and testimonies of former inmates of the boys' penal colonies, of Francophone decolonizing poets and intellectuals, and of Black Panther prison writings. This method illuminates subaltern genealogies of thought on the problems of abjection, subjection, and subaltern agency so central to Genet's writing. By charting the twists and turns between Genet's writing and that of other subaltern writers of abjection, "Agencies of Abjection" reads Genet as a thinker continually involved in a process of exchange, intervention, borrowing, and revision concerning the specific histories and experiences of social abjection.