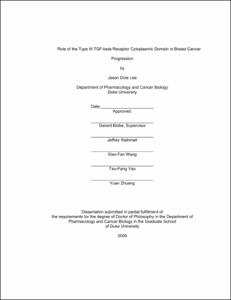 Breast cancer remains among the most common cancers of the developed world. Despite advances in treatment modalities, deaths due to breast cancer are the second leading cause of cancer death among women. The transforming growth factor-beta (TGF-&beta;) pathway is an important modulator of breast cancer progression, acting in a tumor suppressing fashion in early carcinogenesis but switching in a poorly understood fashion to a promoter of cancer progression in later stages. Mutations and loss of function of TGF-&beta; components are common across a variety of cancers. In particular, the expression of the type III TGF-&beta; receptor (T&beta;RIII) is decreased with cancer grade and clinical progression in prostate, lung, ovarian, and pancreatic cancers. In an effort to enhance our understanding of the biology of TGF-&beta; on carcinogenesis, this dissertation looks at the role of T&beta;RIII in breast cancer progression.

Through an examination of clinical specimens, loss of T&beta;RIII was seen at both the message and protein levels with increasing tumor grade. Analysis of correlated patient outcomes showed that low T&beta;RIII expression was predictive of a shorter time to recurrence, demonstrating clinical relevance for T&beta;RIII expression. The contribution of T&beta;RIII to tumor progression was further examined by examining known TGF-&beta; functions, including proliferation, apoptosis, migration, and invasion. T&beta;RIII had no effect on proliferation or apoptosis, but had a suppressive effect on metastasis <italic>in vivo</italic>, as mammary cancer cells stably expressing T&beta;RIII that were orthotopically injected exhibited lower metatstatic burden and local invasion. <italic>In vitro</italic>, breast cancer cells exhibited suppression of migration and invasion in transwell assays. Finally, soluble T&beta;RIII (sT&beta;RIII) was shown to recapitulate the suppressive effects on invasion.

In sum, T&beta;RIII was established as a prognostic marker for recurrence-free survival of breast cancer patients and as a suppressor of metastasis, migration, and invasion. Furthermore, several mechanisms contribute to T&beta;RIII's tumor suppressive effects, namely the generation of sT&beta;RIII and the interaction of T&beta;RIII with GIPC. Taken together, these studies further demonstrate the importance of TGF-&beta; signaling in cancer biology, elucidate mechanisms by which T&beta;RIII suppresses breast carcinogenesis, and expand upon our understanding of the emerging roles of T&beta;RIII in regulating tumor biology in general.