The Use of Children as Props in Political Campaign Advertising 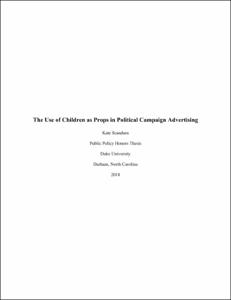 View / Download
762.7 Kb
Date
Author
Scandura, Kate
Advisors
Adair, Bill
Rogerson, Kenneth S.
Hollowell, Adam
Repository Usage Stats
754
views
1,356
downloads
Abstract
This project explores the ways in which children are used in political campaign advertising. Analyzing 97 videos from the 2016 presidential and congressional elections, I coded for the types of children that appeared in campaign advertisements, in what ways they appear, and what messages they are used to convey. I then determined how this differed based on candidate characteristics. I found that girls tend to appear more often than boys, that advertisements feature white children more often than they feature non-white children, that blonde children are disproportionately represented in ads, and that this all varies by candidate and by candidate’s party. I also found that young children and adolescents appear more frequently than babies and teenagers, that the children featured are most often not related to the candidate, that children are generally featured with their parents more often than they are featured with the candidate, and that children very rarely speak in ads, which lends support to the idea that they are used as props.
Type
Honors thesis
Department
Public Policy Studies
Subject
children
political campaign
advertisement
Donald Trump
Hillary Clinton
2016 Election
Permalink
https://hdl.handle.net/10161/16069
Citation
Scandura, Kate (2018). The Use of Children as Props in Political Campaign Advertising. Honors thesis, Duke University. Retrieved from https://hdl.handle.net/10161/16069.
Collections
More Info
Show full item record