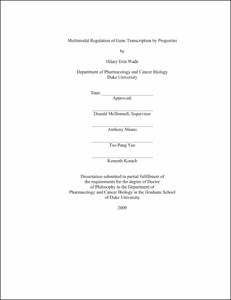 The progesterone receptor (PR) is a member of the nuclear receptor superfamily of ligand-regulated transcription factors. The steroid hormone progesterone binds to PR and induces a conformational change that enables the receptor to bind DNA, recruit cofactors, and directly regulate the transcription of target genes. In addition, extra-nuclear PR can indirectly regulate gene expression by rapidly activating other signaling pathways such as Src/MAPK. Although the direct and indirect functions of PR have been well studied in isolation, it is important to understand the molecular mechanisms by which these pathways can cross talk and integrate to ultimately impact gene expression.

Towards this end, we initiated studies to assess the overall impact of MAPK inhibition on PR transcriptional activity in T47D breast cancer cells treated with the synthetic progestin R5020. During the course of microarray and biochemical analyses that were undertaken to address this issue, we discovered a subset of PR target genes that are enriched for E2F binding sites. Subsequently, we determined that PR-B is a component of several distinct pathways that function both directly and indirectly to positively up-regulate E2F1 expression in T47D breast cancer cells. Firstly, PR directly regulates E2F1 transcription by binding to proximal and distal enhancer sites located near E2F1. Secondly, progestin induces the hyperphosphorylation of Rb, which results in increased recruitment of E2F1 to its own promoter, thereby activating a positive feedback loop that further amplifies its transcription. Finally, PR induces expression of Krüppel-like factor 15 (KLF15) and potentially other Sp/KLF family members, which can bind to GC-rich DNA within the E2F1 promoter and further activate transcription. Together, these results suggest a paradigm for multimodal PR gene regulation that entails cooperation between direct and indirect pathways of PR signaling to achieve the desired downstream transcriptional cascade.

In the breast and other tissues of the female reproductive system, progesterone plays an important role in normal development and function. Therefore, synthetic PR modulators (PRMs) are widely used to manipulate the downstream biology of PR for purposes including contraception and hormone replacement therapy (HRT). However, progestins and PR have also been implicated in disease pathologies such as breast cancer. While the molecular mechanisms by which PR regulates breast tumor growth have not been fully elucidated, recent studies highlight the fact that progestins may have a dose-dependent role in breast cancer progression. Consequently, we undertook studies to identify and characterize any differential effects of low-dose versus high-dose progestins on the downstream activities of PR. Specifically, we found that treatment of breast cancer cells with low-dose progestins can induce maximal transcriptional activation of a subset of PR target genes, including the cell cycle regulators cyclin D1 and E2F1. Furthermore, low-dose and high-dose progestins have differential effects on the phosphorylation of PR and subsequent receptor turnover. Cumulatively, these findings underscore the importance of establishing the effects of a wide range of progestin concentrations on target gene expression and other PR actions, so that we are able to accurately predict the potential consequences of PRMs on downstream PR signaling pathways and biology.