The reasons young children give to peers when explaining their judgments of moral and conventional rules. 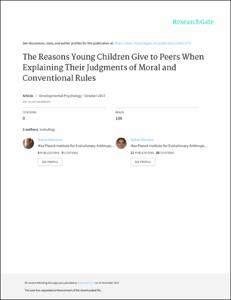 View / Download
797.4 Kb
Date
Authors
Köymen, B
Mammen, M
Tomasello, Michael
Repository Usage Stats
115
views
347
downloads
Abstract
Moral justifications work, when they do, by invoking values that are shared in the common ground of the interlocutors. We asked 3- and 5-year-old peer dyads (N = 144) to identify and punish norm transgressors. In the moral condition, the transgressor violated a moral norm (e.g., by stealing); in the social rules condition, she/he violated a context-specific rule (e.g., by placing a yellow toy in a green box, instead of a yellow box). Children in both age groups justified their punishment in the social rules condition mostly by referring to the rule (e.g., "He must put yellow toys in the yellow box"). In contrast, in the moral condition they mostly justified their punishment by simply referring to the observed fact (e.g., "He stole"), seeing no need to state the norm involved (e.g., "He must not steal"), presumably because they assumed this as part of their moral common ground with their partner. These results suggest that preschoolers assume certain common ground moral values with their peers and use these in formulating explicit moral judgments and justifications. (PsycINFO Database Record
Type
Journal article
Permalink
https://hdl.handle.net/10161/16101
Published Version (Please cite this version)
10.1037/dev0000424
Publication Info
Köymen, B; Mammen, M; & Tomasello, Michael (2018). The reasons young children give to peers when explaining their judgments of moral and conventional rules. Dev Psychol, 54(2). pp. 254-262. 10.1037/dev0000424. Retrieved from https://hdl.handle.net/10161/16101.
This is constructed from limited available data and may be imprecise. To cite this article, please review & use the official citation provided by the journal.
Collections
More Info
Show full item record