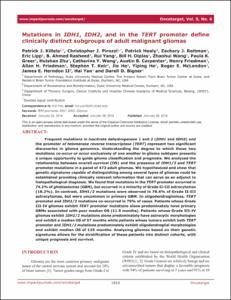 E. L. and Lucille F. Jones Cancer Distinguished Research Professor, in the School of Medicine
The Causes, Mechanisms of Transformation and Altered Growth Control and New Therapy for Primary and Metastatic Tumors of the Central Nervous System (CNS). There are over 16,000 deaths in the United States each year from primary brain tumors such as malignant gliomas and medulloblastomas, and metastatic tumors to the CNS and its covering from systemic tumors such as carcinoma of the lung, breast, colon, and melanoma. An estimated 80,000 cases of primary brain tumors were expected to Guy L. Odom Distinguished Professor of Neurosurgery, in the School of Medicine
At the present time, I am participating in collaborative research in the areas of primary malignant brain tumors, epilepsy and subarachnoid hemorrhage. Primary malignant brain tumors are increasing in frequency. Patients harboring glioblastoma, the most malignant primary brain tumor, have a life expectancy of less than one year. In colloboration with the Division of Neurology and the Department of Pathology, clinical and laboratory trials have been initiated to identify better James B. Powell, Jr. Distinguished Professor of Pediatric Oncology, in the School of Medicine
Overview: Our laboratory is pursuing a comprehensive analysis of the biology and therapy of adult and childhood central nervous system malignancies, particularly high-grade medulloblastoma, glioma, and ependymoma. Laboratory Studies: Active programs, using human adult and pediatric CNS tumor continuous cell lines, transplantable xenografts growing subcutaneously and intracranially in athymic nude mice and rats, and as well as in the subarachnoid space of the ath Professor of Biostatistics and Bioinformatics
Current research interests have application to the design and analysis of cancer clinical trials. Specifically, interests include the use of time-dependent covariables within survival models, the design of phase II cancer clinical trials which minimize some of the logistical problems associated with their conduct, and the analysis of longitudinal studies with informative censoring (in particular, quality of life studies of patients with advanced cancer). Professor of Pathology
Brain tumors are diagnosed in more than 20,000 Americans annually. The most malignant neoplasm, glioblastoma, is also the most common. Similarly, brain tumors constitute the most common solid neoplasm in children and include astrocytomas of the cerebellum, brain stem and cerebrum as well as medulloblastomas of the cerebellum.  My colleagues and I have endeavored to translate the bench discoveries of genetic mutations and aberrant protein expressions found in brain tumors to better understan

Medical Instructor in the Department of Pathology

Assistant Professor in Pathology
Our lab is interested in identifying the specific genetic alterations associated with the genesis and progression of glial malignancies. Studies from our and other laboratories have shown that in adult glioblastomas, approximately 80% of the cases show loss of alleles on chromosome 10, and to a lesser extent on 9p, 17p, 19q and 22q. Amplification of epidermal growth factor receptor gene is detected in about a third of glioblastomas. The high incidence of loss of chromosome 10 alleles sug Medical Instructor in the Department of Radiation Oncology
Dr. Reitman’s clinical interests include radiotherapy for primary and metastatic tumors of the brain and spine.  He is also interested in basic and translational research studies to develop new treatment approaches for pediatric and adult brain tumors.  He uses genomic analysis, radiation biology studies, and genetically engineered animal models of cancer to carry out this research Henry S. Friedman Distinguished Professor of Neuro-Oncology in the School of Medicine
Our research activities center on the molecular genetics and biology of cancer with a focus on the identification, characterization, and therapeutic targeting of driver mutations involved in the genesis and progression of brain cancers.  Gliomas are the most common type of primary brain tumor. Through genomic studies, we have identified mutations in IDH1 and IDH2 in 70% of progressive malignant gliomas. These are somatic missense mutations that alter a conserved arginine residue and gain a
More Authors
Alphabetical list of authors with Scholars@Duke profiles.