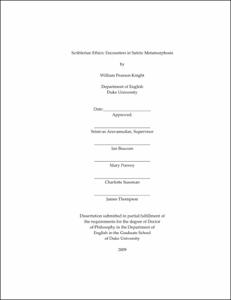 "Scriblerian Ethics" proposes that the aesthetic and ethical standpoint of the writings of the Scriblerians (Pope, Swift, Gay, Arbuthnot, Oxford, Parnell) can be better understood through an attunement to their orientation towards the Longinian sublime and to the metamorphic poetics of Ovid. The project holds the negative and critical features of the group's writing in abeyance, as it attempts to account for the positive, phenomenological concepts and features of Scriblerian satiric and non-satiric writing. The intensities and affiliations of Scriblerian writing that emerge from this study gesture aesthetically and ethically beyond historical subjectivity to an opening to alterity and difference. This opening or hope for the achievement ethical dimension of writing is divulged as the intimate motivation of the literary or aesthetic components that accompany the negative, referential, and critical features of Scriblerian writing.

Examining closely the major writings of Pope and Swift in conjunction with the collaborative writings of the Scriblerus club, the project describes the concern with temporality that emerges from Longinian and Ovidan influence; the Scriblerian reflexivity that culminates in a highly virtual aesthetics; and the ethical elaboration of an orientation toward hospitality that emerges from this temporal and virtual aesthetic orientation. A "Scriblerian ethics" is an affinity for a hospitality not yet achieved in political, economic, and cultural life. Finally, the project analyzes throughout its readings of Scriblerian writing the violence that nevertheless accompanies Scriblerian aesthetics, examining the figures of modernity, criticism, and sexual violence (rape) that permeate Scriblerian texts as barriers or resistances to the achievement of an ethical orientation to alterity.