Young children are more willing to accept group decisions in which they have had a voice. 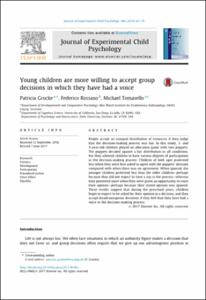 View / Download
827.0 Kb
Date
Authors
Grocke, Patricia
Rossano, Federico
Tomasello, Michael
Repository Usage Stats
155
views
315
downloads
Abstract
People accept an unequal distribution of resources if they judge that the decision-making process was fair. In this study, 3- and 5-year-old children played an allocation game with two puppets. The puppets decided against a fair distribution in all conditions, but they allowed children to have various degrees of participation in the decision-making process. Children of both ages protested less when they were first asked to agree with the puppets' decision compared with when there was no agreement. When ignored, the younger children protested less than the older children-perhaps because they did not expect to have a say in the process-whereas they protested more when they were given an opportunity to voice their opinion-perhaps because their stated opinion was ignored. These results suggest that during the preschool years, children begin to expect to be asked for their opinion in a decision, and they accept disadvantageous decisions if they feel that they have had a voice in the decision-making process.
Type
Journal article
Subject
Development
Equality
Fairness
Participation
Procedural justice
Voice effect
Permalink
https://hdl.handle.net/10161/16121
Published Version (Please cite this version)
10.1016/j.jecp.2017.08.003
Publication Info
Grocke, Patricia; Rossano, Federico; & Tomasello, Michael (2018). Young children are more willing to accept group decisions in which they have had a voice. J Exp Child Psychol, 166. pp. 67-78. 10.1016/j.jecp.2017.08.003. Retrieved from https://hdl.handle.net/10161/16121.
This is constructed from limited available data and may be imprecise. To cite this article, please review & use the official citation provided by the journal.
Collections
More Info
Show full item record