Effect of socioeconomic status as measured by education level on survival in breast cancer clinical trials. 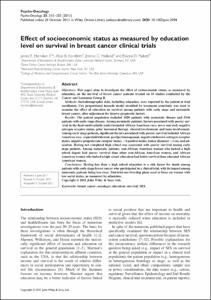 Professor of Biostatistics & Bioinformatics
Current research interests have application to the design and analysis of cancer clinical trials. Specifically, interests include the use of time-dependent covariables within survival models, the design of phase II cancer clinical trials which minimize some of the logistical problems associated with their conduct, and the analysis of longitudinal studies with informative censoring (in particular, quality of life studies of patients with advanced cancer).