Desire and the Rationality of Virtue 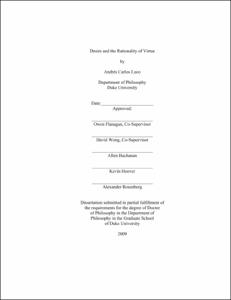 A classic question in moral philosophy asks "Why be moral?" In other words, what reason or motive do people have to act in accordance with the requirements of morality? In the tradition of Thomas Hobbes and David Hume, this project defends the thesis that nearly all people have reason to be moral nearly all of the time, because moral conduct generally serves individuals' desires and needs. It's argued, first, that a reason for action must be capable of motivating an agent to act, and second, that reasons for action motivate through the desires of the agent. This view is defended against the objection that reasons for action are not contingent on any particular agent's desires. Turning to morality, the case is made that the desires of an individual can be consonant with the demands of morality in any of three possible ways: (1) moral action serves one's other-regarding desires to help others; (2) moral action serves one's moral desires, which are formed when one internalizes the moral norms of his or her community; and (3) moral action serves one's self-regarding desires to avoid punishments that one incurs by violating moral norms. In the final chapter, it is acknowledged that the moral norms which happen to prevail in a society sometimes conflict with the moral convictions of individuals. Under certain conditions, however, it can be rational for nearly all members of a society to collectively change existing moral norms. Furthermore, it is within the power of individuals to foment the conditions for collective transitions to alternative moral norms.