Environmental Activists as Agents of Social Democratization: a Historical Comparison of Russia and Mexico 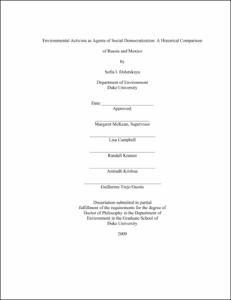 This study is a comparative historical analysis of the link between environmental activism and state-society relations in 20th century Russia and Mexico. It explores the three main currents of environmentalism that originated in these two countries under non-democratic political systems that originated in the social revolutions of 1910 (Mexico) and 1917 (Russia) and the roles that each current has played in the process of democratization that began in the 1980s. It is based on critical evaluation and synthesis of the following theoretical fields: collective action, social movements, political regime change and democratic transition. Scholarly literature and press sources are used to corroborate and evaluate findings from in-depth qualitative interviews with environmental activists, researchers, lawyers, and journalists as well as data from participant observation conducted by the author in Russia and in Mexico. The main findings of the study are two-fold. 1) Environmental activism affects social rather than political democratization. 2) The type of environmental activism that has the most significant impact on social democratization is social environmentalism - the current that emphasizes the synergy between the struggles for social justice and civil rights on the one hand and against environmental degradation on the other.