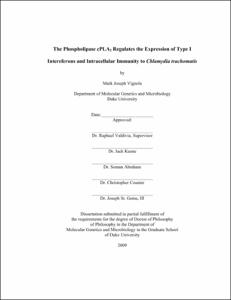 When bacterial pathogens infect their hosts, they illicit responses intended on containing and eliminating these invaders. This happens not only on the organismal level, but also on the cellular level. When a cell detects that it has been infected by an intracellular pathogen, it triggers a set of internal signaling events intended to contain the intruder. These events may allow the cell to produce antimicrobial agents or may help recruit members of the immune system to help fight the infection. In the case of closely evolved pathogens, such cell signaling events can be co-opted by the invading bacteria to its advantage. One example of this is infection with the gram-negative bacteria Chlamydia trachomatis. Infection with the obligate bacterial intracellular pathogen Chlamydia trachomatis leads to the sustained activation of the small GTPase Ras and many of its downstream signaling components. In particular, the mitogen-activated protein kinase ERK and the calcium-dependent phospholipase cPLA2 are activated and are important for the onset of inflammatory responses during chlamydial infection. In this study we tested if activation of ERK and cPLA2 occurred as a result of Ras signaling during infection and determined the relative contribution of these signaling components to chlamydial replication and survival. we provide genetic and pharmacological evidence that Ras, ERK and, to a lesser extent, cPLA2 activation are uncoupled during infection, suggesting that Chlamydia activates individual components of this signaling pathway in a non-canonical manner. In human cell lines, inhibition of ERK or cPLA2 signaling did not adversely impact C. trachomatis replication. In contrast, in murine cells cPLA2, and to a lesser extent ERK, signaling played a significant protective role against C. trachomatis. we determined that cPLA2-deficient murine cells are permissive for C. trachomatis replication because of their impaired expression of &#946; interferon and the induction of immunity-related GTPases (IRG) important for the containment of intracellular pathogens. Overall, these findings define a previously unrecognized role for cPLA2 in the induction of autonomous innate immune responses to Chlamydia infections.