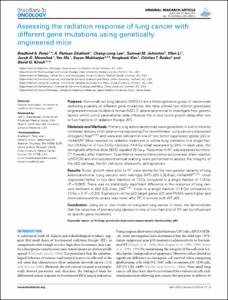 Barbara Levine University Distinguished Professor
My clinical interests are the multi-modality care of patients with bone and soft tissue sarcomas and developing new sarcoma therapies. My laboratory interests include utilizing mouse models of cancer to study cancer and radiation biology in order to develop new cancer therapies in the pre-clinical setting. Assistant Professor in Radiation Oncology
The overall goal of the Lee lab’s research program is to improve the survivorship of cancer patients by minimizing acute and long-term side effects of radiation therapy. We are also investigating novel medical countermeasures against acute radiation syndrome in the scenarios of nuclear terrorism.
Alphabetical list of authors with Scholars@Duke profiles.