Intermittency and Irreversibility in the Soil-Plant-Atmosphere System 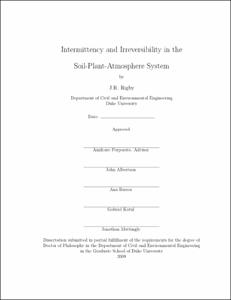 The hydrologic cycle may be described in essence as the process of water rising and falling in its various phases between land and atmosphere. In this minimal description of the hydrologic cycle two features come into focus: intermittency and irreversibility. In this dissertation intermittency and irreversibility are investigated broadly in the soil-plant-atmosphere system. The theory of intermittency and irreversibility is addressed here in three ways: (1) through its effect on components of the soil-plant-atmosphere system, (2) through development of a measure of the degree of irreversibility in time-series, and (3) by the investigation of the dynamical sources of this intermittency. First, soil infiltration and spring frost risk are treated as two examples of hydrologic intermittency with very different characters and implications for the soil plant system. An investigation of the water budget in simplified soil moisture models reveals that simple bucket models of infiltration perform well against more accurate representation of intra-storm infiltration dynamics in determining the surface water partitioning. Damaging spring frost is presented as a ``biologically-defined extreme event'' and thus as a more subtle form of hydrologic intermittency. This work represents the first theoretical development of a biologically-defined extreme and highlights the importance of the interplay between daily temperature mean and variance in determining the changes in damaging frost risk in a warming climate. Second, a statistical measure of directionality/asymmetry is developed for stationary time-series based on analogies with the theory of nonequilibrium thermodynamics. This measure is then applied to a set of DNA sequences as an example of a discrete sequence with limited state-space. The DNA sequences are found to be statistically asymmetric and further that the local degree of asymmetry is a reliable indicator of the coding/noncoding status of the DNA segment. Third, the phenomenology of rainfall occurrence is compared with canonical examples of dynamical intermittency to determine whether these simple dynamical features may display a dominant signature in rainfall processes. Summer convective rainfall is found to be broadly consistent with Type-III intermittency. Following on this result we studied daytime atmospheric boundary layer dynamics with a view toward developing simplified models that may further elucidate the interaction the interaction between land surface conditions and convective rainfall triggering.