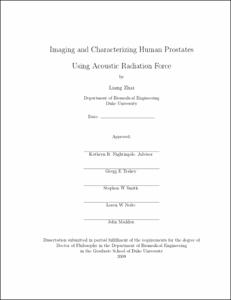 Prostate cancer (PCa) is the most common non-cutaneous cancer in men in the United States. Early detection of PCa is essential for improving treatment outcomes and survival rates. However, diagnosis of PCa at an early stage is challenged by the lack of an imaging method that can accurately visualize PCas. Because pathological processes change the mechanical properties of the tissue, elasticity imaging methods have the potential to differentiate PCas from other prostatic tissues. Acoustic radiation force impulse (ARFI) imaging is a relatively new elasticity imaging method that visualizes the local stiffness variations inside soft tissue.

The work presented in this dissertation investigates the feasibility of prostate ARFI imaging. Volumetric ARFI data acquisition and display methods were developed to visualize anatomic structures and pathologies in <italic>ex vivo </italic>human prostates. The characteristic appearances of various prostatic tissues in ARFI images were identified by correlating ARFI images with McNeal's zonal anatomy and the correlated histological slides, in which prostatic pathologies were delineated by a pathologist blinded to the ARFI images. The results suggest ARFI imaging is able to differentiate anatomic structures and identify suspicious PCa regions in the prostate.

To investigate the correlation between ARFI displacement amplitudes and the underlying tissue stiffness in the prostate ARFI images, the mechanical properties of prostatic tissues were characterized using a quantitative method, based upon shear wave elasticity imaging (SWEI). Co-registered ARFI and SWEI datasets were acquired in excised prostate specimens to reconstruct the shear moduli of prostatic tissues. The results demonstrated that variations in ARFI displacement amplitudes were inversely related to the underlying tissue stiffness; and the reconstructed shear moduli of prostatic tissues had good agreements with those reported in literature. The study suggests the matched ARFI and SWEI datasets provide complementary

To increase the efficiency of the data acquisition, a novel imaging sequence was developed to acquired matched ARFI-SWEI datasets without increasing the number of excitations compared to a conventional ARFI imaging sequence. Imaging parameters were analyzed both theoretically and experimentally. An analytical model was derived to quantify the fundamental accuracy limit in the reconstructed shear modulus, and demonstrated good agreement with the experimental data. The novel sequence was demonstrated in tissue-mimicking phantoms.