Formation and Function of Noncentrosomal Microtubule Arrays in Mammalian Epithelia 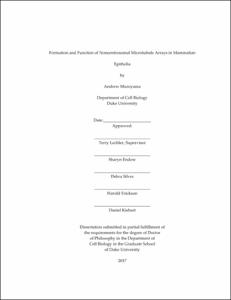 Microtubules play numerous roles in diverse cellular processes, including cell migration, intracellular trafficking, and chromosome segregation during cell division. Decades of research have defined many of the biochemical and biophysical properties of microtubules and how microtubule organization is controlled in proliferative cells. Diverse cell types rearrange their microtubules to form noncentrosomal microtubule arrays as they differentiate. However, little is known about the mechanisms regulating noncentrosomal microtubule array formation in many tissues, particularly in mammals. Because the mechanisms regulating formation of these arrays is largely mysterious, one of the key challenges in the field has been a lack of viable systems to specifically perturb microtubule organization in differentiated cells in vivo. I have used the mammalian epidermis and small intestine, two distinct types of epithelia, to investigate the formation and function of noncentrosomal microtubules.

In the mammalian epidermis, where differentiation is accompanied by a reorganization of microtubules from radial arrays, organized by the centrosome, to cortical arrays, I have uncovered a mechanism that links centrosome inactivation to cell-cycle exit. By purifying centrosomes from proliferative and differentiated keratinocytes, I demonstrate for the first time that keratinocyte differentiation induces an inherent inactivation of the centrosome. This is driven, in part, by the specific delocalization of a pool of the gamma-tubulin ring complex (gamma-TuRC) that is bound by the accessory factor Nedd1. I show that there are two distinct gamma-tubulin ring complexes in keratinocytes: one bound by Nedd1 and one bound by CDK5RAP2. Through both in vitro microtubule nucleation assays and artificial targeting of gamma-TuRCs in cells, I show that CDK5RAP2 can stimulate gamma-TuRC-mediated microtubule nucleation but Nedd1 cannot. I propose that Nedd1/gamma-TuRCs are, instead, critical for microtubule anchoring at the centrosome. To link differentiation status to centrosome inactivation, I show that, unexpectedly, differentiation per se does not induce Nedd1gamma-TuRC delocalization. Instead, cell cycle exit, which normally accompanies differentiation, triggers delocalization of gamma-TuRCs to shift microtubule organizing activity away from the centrosome. This work has identified for the first time the existence of distinct gamma-TuRCs within the cells and demonstrates that gamma-TuRC activity can be modified through binding of distinct accessory factors. Extending these findings to differentiation-induced microtubule reorganization, this work identifies a mechanism that couples entry into a quiescent state in post-mitotic cells to centrosome activity.