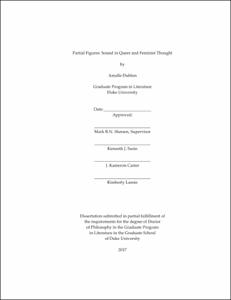 This dissertation contends that sound and aurality ought to be more fully integrated into how gender and sexuality are thought. The dissertation’s title, “Partial Figures,” refers to its aims: not to exhaustively document the status of sound within discourses of sexual difference and dissidence, but rather to sketch how queer and feminist thought might draw on sound’s resources. The project is thus situated within the longer trajectory of visual approaches to power and gender. “Partial Figures” also describes what I suggest are sound and aurality’s specific erosion of the figure as a presumptive requirement of approaches to social life and aesthetic form. By partial, I mean both incomplete and nonunitary, subject to the decay and growth, the putative disfigurement, that Hortense Spillers describes under the rubric of flesh. Finally, the notion of being partial, as opposed to impartial, is also at play. Partiality -- having a weakness for something – describes an orientation that bridges affection and dependency or debility; it compromises aesthetics as a site for the exercise of judgement. To be partial to something or someone is to be rendered incomplete by that thing, a torsion or disfigurement that marks queer and feminist method. By considering notions of musical flavor and corporeality (Chapter 1), queer sound ecologies (Chapter 2), and gendered ontologies of frequency and vibration (Chapter 3), I revisit key conceptual knots within theories of gender and sexuality that require a more sustained attention to sound and aurality.

I focus on two fundamental preoccupations within queer and feminist scholarship that, I argue, are reconfigured by the methodological, material, and historical resources of sound: corporeality (Chapter 1) and ecology (Chapter 2). From this assessment of sound’s essential resources for theories of gender and sexuality, Chapter 3 then moves, through a consideration of sexual difference as noise, to suggest that sonic ontologies likewise cannot properly be thought without queer and feminist method.

The first chapter concerns corporeality as a principal site of feminist theory’s turn to questions of matter and affect in the 2000s. For some influential theorists, I argue, an ambiguous and overdetermined relationship between food, fatness, and “epidemic” debility became a cipher for the specifically causative or agential powers of matter and affect. I show, however, that these powers have already been thought otherwise in the overlapping contexts of black studies and musicology. I take up notions of musical flavor and culinary sound in the work of Fred Moten and Theodor Adorno, respectively, alongside Hortense Spillers’ account of ungendered flesh as resisting figuration in the sense of both embodiment and (ac)counting. Like fatness, musical flavor is felt as the distension and elaboration of form and enjoyment, its aesthetic and figural enrichments taken for a failure to budget and apportion pleasure, need, and dependency. Within feminism’s turn toward corporeal matter, I argue, fatness and food have been made to serve as both a hinge and an impasse. On the one hand, the purported links between eating, fatness, and debility have been taken as the very image of self-evident causation. On the other hand, however, fatness troubles etiology, generating endless (and to date, inconclusive) speculation about what causes it and how its alleged social pathology might be reversed. Its status as a site of commingled growth and purported decay, life and “premature” death or debility, has presented itself to some writers as an apparent conundrum. In addition to Moten, Adorno, and Spillers, I draw on critiques of causality by Denise Ferreira da Silva and Michel Foucault. The nonopposition of growth and decay, life and debility, enjoyment and dependency, emerges through music and artworks by Future, UGK, Anicka Yi, Alvin Lucier, and Constantina Zavitsanos, among others.

Chapter 2 concerns a second historically vexed site for thinking gender and sexuality: nature and ecology. I approach the relation between sex, ecology, and sound through one of queer theory’s founding preoccupations: “public,” outdoor, or undomestic sexual gathering. “Public sex” has been imagined as a question of sightlines and their obstruction, but I argue that its sociality is given form by acoustics and acute sensitivity to environmental sound in spaces where visual obscurity offers both protection and danger. I read the 1998 album Second nature: an electro-acoustic pastoral, produced from field recordings of a parkland cruising ground by the group Ultra-red, who develop an audio ecology of this queer sexual commons alongside a critique of the pastoral as a site of musical and ecological containment. Works by Samuel Delany, Simon Leung, June Jordan, Park McArthur, Lorraine O’Grady, TLC, and others situate Ultra-red’s Second nature within an understanding of a sexual commons that views need and dependency as forms of ecological wealth.

Chapter 3 considers noise as a figure for feminine sexual difference, suggesting that ontologies of sound must be conditioned by queer and feminist thought. My argument proceeds through an account of chatter, frequency, and perpetual motion, considering Drake’s “Hotline Bling,” chatbots, gifs, David Lynch’s 2006 film Inland Empire, consciousness-raising, and the work of artists Jessica Vaughn, Amber Hawk Swanson, and Pauline Oliveros. Questions of frequency and vibration have emerged as part of sonic ontologies in recent years; I trace the entry of vibration and “vibes” into U.S. popular discourse in the early 20th century through the theological and musicological writing of Sufi Inayat Khan. Among his areas of influence, I focus on the history of modern dance, particularly its Orientalist preoccupation with the animated wave-forms of loose fabric, which was demonstrably molded by Khan’s theories of vibration. This racially and sexually marked “signature” gesture was the subject of several intellectual property lawsuits that sustained legal ambiguity about the status of performance as property.