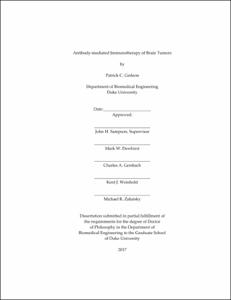 Conventional therapy for malignant glioma (MG) fails to specifically target tumor cells. In contrast, immunotherapy offers an exquisitely precise approach, and substantial evidence indicates that if appropriately redirected, T cells can eradicate large, well-established tumors. Even the latest generation of redirected T cell therapies are limited, however, in that they require a centralized manufacturing infrastructure with heavily trained laboratory personnel to genetically modify each patient’s own T cells, use viral transduction which poses uncertain risks, are limited to the initial subset of T cells manipulated and infused, and still face uncertainty as to the optimal T cell phenotype to infuse. This dissertation reports the rational development and clinical translation of a fully-human, bispecific antibody (hEGFRvIII-CD3 bi-scFv) that overcomes these limitations through a recombinant antibody approach that effectively redirects any human T cell to lyse MG cells expressing a tumor-specific mutation of the epidermal growth factor receptor (EGFRvIII).

Chapters one, two and three provide an overview of T cell based immunotherapy of cancer and advances in antibody engineering. Also included is a discussion of the current standard-of-care therapy for MG, other immunotherapeutic approaches for MG, and relevant targets and their therapeutic potential for the treatment of MG.

Chapter four details the rational development of a fully-human, anti-human bispecific antibody, hEGFRvIII-CD3 bi-scFv, for immunotherapy of MG. By generating a panel of fully human bispecific single chain variable fragments (bi-scFvs) and testing their specificity through successive stages of screening and refinement, a highly-expressed and easily purified construct with high-affinity to both CD3 and EGFRvIII target antigens was obtained (hEGFRvIII-CD3 bi-scFv). In vitro, hEGFRvIII-CD3 bi-scFv re-directed naïve human T cells to upregulate cell surface activation markers, secrete pro-inflammatory cytokines, and proliferate in response to antigen-bearing targets. Each of these anti-tumor effects were robust and occurred exclusively in the presence of target antigen, illustrating the specificity of the approach. Using MG cell lines expressing EGFRvIII and patient derived MG with endogenous drivers and levels of EGFRvIII expression, bispecific antibody induced specific lysis was assessed. In each case, hEGFRvIII-CD3 bi-scFv was both potent and antigen-specific, mediating significant target-specific lysis at exceedingly low antibody concentrations. Tumor growth and survival was assessed in xenogenic subcutaneous and orthotopic models of human MG, respectively. In both these models, well-engrafted, patient-derived MG was effectively treated. Intravenous administration of hEGFRvIII-CD3 bi-scFv resulted in significant regression of tumor burden in the subcutaneous models and significantly extended survival in the orthotopic models.

Chapter five discusses challenges associated with intratumoral heterogeneity and details two mechanisms by which bispecific antibodies like hEGFRvIII-CD3 bi-scFv can induce epitope spreading, or an immunological response against tumor antigens other than those initially targeted. These mechanisms include: 1) re-activation of pre-existing T cell clones that have specificity for the tumor but fail to mount an immune response prior to bispecific antibody induced stimulation and 2) tumor cell death that results in release of tumor antigens and subsequent antigen uptake, processing and presentation by antigen presenting cells (APCs) leading to a secondary immune response. The chapter concludes with a discussion of a novel class of recombinant antibody molecules developed as part of this dissertation work, Bispecific Activators of Myeloid Cells (BAMs), that function to enhance phagocytosis and antigen presentation. BAM molecules may be useful in conjunction with other immunotherapeutic modalities to induce epitope spreading and combat intratumoral heterogeneity.

This led to the hypothesis that activated T cells, known to cross the blood-brain barrier (BBB) to perform routine immunosurveillance of the central nervous system (CNS), may bind to hEGFRvIII-CD3 bi-scFv intravascularly, via its CD3 receptor, and carry or “hitchhike” the large CD3 binding macromolecule to tumors located behind the BBB. Indeed, studies have revealed that adoptive transfer of activated T cells significantly increases the biodistribution of intravenously administered hEGFRvIII-CD3 bi-scFv to orthotopic glioma. Furthermore, blocking T cell extravasation, using natalizumab, for example, a drug used clinically to prevent the migration of T cells to the CNS in patients with multiple sclerosis, completely abrogates the increase in efficacy observed with the adoptive transfer of activated T cells. This newly uncovered hitchhiking mechanism of drug delivery to the CNS provides an important tool to enhance the immunotherapy of brain tumors and has potentially far-reaching consequences for the treatment of other CNS disorders, such as Alzheimer’s or Parkinson’s disease, where issues regarding drug delivery to the CNS are relevant. To begin to study this mechanism of drug delivery in disorders where the blood-brain barrier is intact, we have developed a novel transgenic murine model that expresses EGFRvIII at very low levels within neurons in the brain and have demonstrated that intravenously administered EGFRvIII-targeted recombinant antibody can accumulate in the CNS parenchyma, even in the presence of an intact BBB.

On the basis of these results, a series of clinical research development activities were conducted that have led to the initiation of a clinical study to test the hitchhiking mechanism of drug delivery in patients and ultimately to translate hEGFRvIII-CD3 bi-scFv therapy as a safe and effective treatment for patients with MG. These activities have resulted in a foundation in pre-clinical toxicology, clinical grade biologic manufacturing, clinical protocol development, and regulatory processes necessary to safely translate hEGFRvIII-CD3 bi-scFv therapy to the clinic.

This has involved conducing an extended single-dose toxicity study of hEGFRvIII-CD3 bi-scFv in animals to support studies in humans, the results of which are detailed in chapter seven. To assess for toxicity, human CD3 transgenic mice were administered hEGFRvIII-CD3 bi-scFv or vehicle as a control. Animals were observed for 14 days post-dosing with an interim necropsy on day two. Endpoints evaluated included clinical sings, body weights, feed consumption, clinical chemistries, hematology, urinalysis, and histopathology. There were no clinical observations, evidence of experimental autoimmune encephalomyelitis (EAE), or change in body weight or feed consumption noted during the study that would be associated with toxicity. Furthermore, no statistical difference was observed between drug- and control-receiving cohorts in hematological parameters or urinalysis and no pathological findings related to EGFRvIII-CD3 bi-scFv administration were observed. Statistical differences were observed between drug-treated and control-treated cohorts for some of the clinical chemistries assessed, such as hematocrit, calcium and phosphorus among the female, 14-day analysis cohorts.

To produce hEGFRvIII-CD3 bi-scFv and autologous activated T cells to be administered to patients for clinical study, chemistry, manufacturing and control protocols for the production of clinical grade hEGFRvIII-CD3 bi-scFv and autologous activated T cells were developed and implemented. The data presented in chapter eight describe optimized manufacturing processes and rationale for the selection and implementation of in-process and release analytical methods. This work includes the generation of a stable Chinese hamster ovary (CHO) cell line that expresses high levels of hEGFRvIII-CD3 bi-scFv, the generation and certification of a current Good Manufacturing Practice (cGMP) master cell bank (MCB), optimization and scale up of upstream and downstream manufacturing procedures, and development of standard operating procedures (SOPs) for the manufacture and assessment of clinical grade hEGFRvIII-CD3 bi-scFv and autologous activated T cells. Together, these have allowed for the production of clinical grade antibody and autologous patient derived cells within Duke University Medical Center. The production of recombinant antibodies for use in the clinic is a complex endeavor often performed in industry with teams of highly skilled scientists who test and optimize manufacturing protocols using a large, well-established manufacturing infrastructure. The successful production of clinical grade recombinant antibody at an academic center, therefore, represents a significant achievement and would likely be of interest to other academic-based researchers and clinicians embarking on similar clinical endeavors.

Chapter nine describes a clinical protocol for a phase 0 study of hEGFRvIII-CD3 bi-scFv in patients with recurrent EGFRvIII-positive glioblastoma (GBM). The protocol details intravenous administration of single doses of radiolabeled hEGFRvIII-CD3 bi-scFv with and without pre-administration of radiolabeled autologous activated T cells in a given patient. This will allow for imaging studies that will reveal the pharmacokinetics of the recombinant antibody both with and without adoptive transfer of autologous activated T cells. Endpoints include an assessment of the: intracerebral tumor localization of 124iodine (I)-labeled hEGFRvIII-CD3 bi-scFv with and without prior administration of 111indium (In)-labeled autologous T cells; percentage of patients with unacceptable toxicity; percentage of patients alive or alive without disease progression six months after study drug infusion; median progression-free survival; 111-In-autologous T cell intracerebral tumor localization; and percentage of patients who are EGFRvIII-positive at recurrence.

Chapter 10 concludes with a discussion of ongoing and anticipated future pre-clinical and clinical research. Together, these data presented in this dissertation have been submitted to the US Food and Drug Administration (FDA) in support of an Investigational New Drug (IND) application permit for clinical studies of hEGFRvIII-CD3 bi-scFv at Duke University Medical Center. This clinical study of the hitchhiking mechanism of drug delivery and the pharmacokinetics of hEGFRvIII-CD3 bi-scFv may have far reaching implications for disorders of the CNS where drug access past the BBB is relevant and will advance our understanding of hEGFRvIII-CD3 bi-scFv therapy in patients, guiding future clinical study of the molecule as a safe and effective form of immunotherapy for patients with EGFRvIII-positive GBM and other cancers.