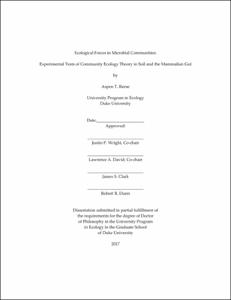 Microbes are the foundation of all ecosystems and crucial players in major ecosystem processes. However, most of our ecological theory was developed for plants and animals and thus may not help us understand these important communities. Previous syntheses have found mixed evidence for ecological patterns in observational data of microbes. In my dissertation, I combine observation and experiments to identify forces structuring microbial communities and how these are similar or different from those at play in systems of macroorganisms. In two chapters, I test new ecological hypotheses in soil microbial communities. In later chapters, I draw on similar ecological theory to explore the relative importance of host and microbial control for the gut microbiota.

In chapter one, I analyze insect, fungal, and bacterial responses to urbanization and habitat fragmentation. This study is the first of its kind to compare scaling relationships between macro- and micro-organisms in the same habitats. I find that microbial communities were vastly more immune than even the smallest of animals to human perturbation.

In chapter two, I seek to identify the drivers responsible for microbial community assembly during secondary succession. I use a fully factorial microcosm experiment that manipulates both biotic and abiotic factors in microcosms emulating old-fields. I find that both plant community and soil conditions are important for determining microbial community composition but that unique taxa respond to each driver.

In chapter three, I aim to quantify and document the impact of gut nitrogen availability on the microbiota. I find that stoichiometric mismatch between microbes and gut resources is pervasive for mammals, indicating that nitrogen may be limiting. Furthermore, I show that nitrogen availability in the gut is under host control, with host secreted nitrogen serving as a dynamic means for the host to manipulate microbial composition.

In chapter four, I use both in and ex vivo approaches to document shifts in composition and changes in the environment in the gut following antibiotic treatment. I find that the most significant abiotic shift is an increase in redox potential, which is due primarily to changes in microbial metabolism rather than a host response. Feedbacks between the environment and the microbial community, as well as dispersal limitation, then contribute to compositional change during post-antibiotic succession.