The Social and Reproductive Behavior of Male Chimpanzees in Gombe National Park, Tanzania 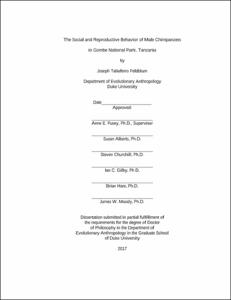 I. In many species of non-human primates, males cooperate and form friendly social bonds while simultaneously competing with each other for dominance rank and mating opportunities. While several studies reveal clear links between female bonds and correlates of fitness in female philopatric primate species, few have investigated whether bonds among males have measurable fitness benefits. Further, no studies in chimpanzees have investigated the fitness effects of cooperative exchange, or contrasted the fitness effects of bond formation and cooperative exchange. Here, I investigate whether 1) male social bonds, 2) position in affiliative and coalition networks, or 3) strategic exchange with other individuals of grooming for support or tolerance facilitate fitness benefits in one population of wild, free-ranging chimpanzees. I generated measures of social connectedness, coalition formation, and grooming effort for each male in two-year periods from 1990 to 2011, and employed mixed models to determine whether, controlling for current rank and age, these measures predicted 1) rank change (a correlate of future reproductive output) and 2) reproductive success within each period. I found that rank change was associated with betweenness in the network of coalition formation, but only weakly with social bonds and not at all with position in the network of social relationships. I further found that rank change was predicted by grooming effort, although this relationship depended on male dominance rank. Surprisingly, reproductive success was not associated with social connectedness or with betweenness in coalitionary or social relationship networks. Instead, grooming effort strongly predicted reproductive success. Thus it appears that males that occupy central positions in the coalition network, and those that groom others at a high rate, are more likely to rise in rank (if they are low-ranking to begin with). However, males that successfully sire offspring groom others at a high rate. These results suggest that, unlike in cercopithecine primates, social bonds do not enhance fitness in male chimpanzees, and instead males rely on grooming and coalition formation to improve their rank and reproductive success.

II. Animals face both costs and benefits associated with living in groups. When the costs of membership exceed the benefits, group fissions can occur. Fissions are documented in a number of animal species, but are comparatively rare in male philopatric primates. One of the few likely cases occurred in chimpanzees in 1973 in Gombe National Park, Tanzania, when the main study community split into two separate communities, Kasekela and Kahama. Over the next four years, the Kasekela community killed the adult males and one female of the Kahama community. Here we use social network analysis to explore the process of community fission in chimpanzees by examining association, grooming, and ranging patterns. We found that the two communities split from one original cohesive community, although one with incipient subgrouping patterns. Subgrouping patterns in the grooming and association networks began to increase sharply beginning in 1971, and this period closely coincided with a dominance struggle between three high-ranking males and with a peak in operational sex ratio. Finally, we found a relationship between post-split community membership and previous association, grooming and ranging patterns in most periods of analysis, a tendency that became more pronounced as the fission approached. Thus, analysis suggests that the community began to split during a time of unusual sex ratio and a protracted dominance struggle, and that individuals remained with others with whom they preferentially associated in the previous years. These results are contrasted with group fissions in other taxa, and provide clues to the costs and benefits of group membership in chimpanzees.

III. In sexually reproducing animals, male and female reproductive strategies often conflict. In some species, males use aggression to overcome female choice, but debate persists over the extent to which this strategy is successful. Previous studies of male aggression toward females among wild chimpanzees have yielded contradictory results about the relationship between aggression and mating behavior. Critically, however, copulation frequency in primates is not always predictive of reproductive success. We analyzed a 17-year sample of behavioral and genetic data from the Kasekela chimpanzee community in Gombe National Park, Tanzania, to test the hypothesis that male aggression toward females increases male reproductive success. We examined the effect of male aggression toward females during ovarian cycling, including periods when the females were sexually receptive (swollen) and periods when they were not. We found that, after controlling for confounding factors, male aggression during a female’s swollen periods was positively correlated with copulation frequency. However, aggression toward swollen females was not predictive of paternity. Instead, aggression by high-ranking males toward females during their nonswollen periods was positively associated with likelihood of paternity. This indicates that long-term patterns of intimidation allow high-ranking males to increase their reproductive success, supporting the sexual coercion hypothesis. To our knowledge, this is the first study to present genetic evidence of sexual coercion as an adaptive strategy in a social mammal.