"Choosing the Jesus Way:" the Assemblies of God's Home Missions to American Indians and the Development of an Indian Pentecostal Identity 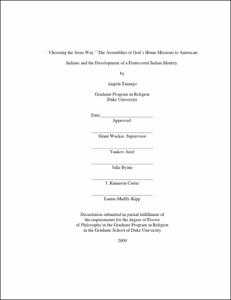 This dissertation explores the history of the Assemblies of God's Home Missions to American Indians, the development of an American Indian leadership in the denomination and the development of a Pentecostal Indian identity. The history that is told in this work is that of a century-long struggle by American Indian Pentecostals for autonomy, leadership, and recognition within the Assemblies of God. I argue that the AG's efforts to establish indigenous churches in its home missions work to American Indians bore two important and largely unanticipated consequences. The first was that it prompted American Indian Pentecostals to forge a new identity: fully Indian and fully Pentecostal. The second was that it forced white Pentecostals to own up to their belief in the indigenous principle: that God's Spirit fell equally on peoples, without regard to ethnicity or social standing. I focus mainly on giving voice to the Pentecostal Indian actors in this history, in order to fill in the gaps on a group of modern Pentecostal believers that were almost never written about in the histories of the movement.