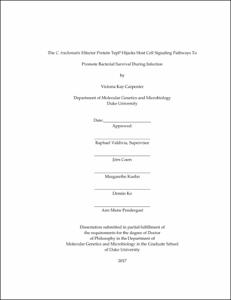 Chlamydia trachomatis is a bacterial pathogen with a large socioeconomic impact: it is the leading cause of preventable blindness worldwide, and the most prevalent sexually transmitted infection in the United States. Despite its importance, relatively little is known about the molecular mechanisms that Chlamydia employs to invade epithelial cells, manipulate the secretory pathway, evade innate immune responses and acquire nutrients from its host. Chlamydia, like many other intracellular pathogens, is known to use a type III secretion mechanism to deliver bacterial effector proteins directly to the host cell cytoplasm. These effectors are thought to be the principle actors involved in co-opting host cell functions. TepP is an effector protein that is pre-loaded into infectious Chlamydia particles, and that is secreted early during infection, but whose function is unknown. We took large-scale, unbiased approaches to identify genes whose transcription is modified during the course of infection in a TepP-dependent manner (microarrays), and proteins that interact with TepP and and/or whose phosphorylation is altered by the absence of TepP (proteomics). We used biochemical techniques, cell biology, and molecular techniques to validate interactions identified using large-scale methods, and to further probe the molecular mechanism underlying these connections. In sum, we have determined that TepP contributes to four major phenotypes: changes in the host cell cytoskeleton, modification of the host cell phosphoproteome, bacterial replication, and interferon-dependent gene activation. We have additionally determined that TepP interacts with the Crk family of host cell adaptor proteins, and the class 1 phosphoinositol-3-kinase (PI3K). Cell lines where the levels or activity of TepP interacting partners were modified by deletion, knockdown, or inhibitors, showed that these host proteins are important for the growth of Chlamydia during infection, but are not required for all TepP-dependent phenotypes. TepP not only interacts with PI3K but also induces its activation during infection. Finally, we have determined that the requirements for phosphorylation of TepP are complex, but that the Src kinases are largely responsible for its phosphorylation. Additionally, Src kinases are required for some TepP-dependent phenotypes, but are not required for the recruitment of TepP-interacting proteins during infection.