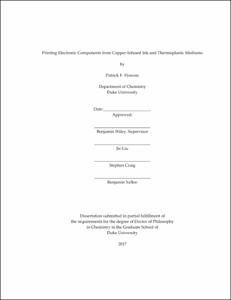 The demand for printable electronics has sharply increased in recent years and is projected to continue to rise. Unfortunately, electronic materials which are suitable for desired applications while being compatible with available printing techniques are still often lacking. This thesis addresses two such challenging areas.

In the realm of two-dimensional ink-based printing of electronics, a major barrier to the realization of printable computers that can run programs is the lack of a solution-coatable non-volatile memory with performance metrics comparable to silicon-based devices. To address this deficiency, I developed a nonvolatile memory based on Cu-SiO2 core-shell nanowires that can be printed from solution and exhibits on-off ratios of 106, switching speeds of 50 ns, a low operating voltage of 2 V, and operates for at least 104 cycles without failure. Each of these metrics is similar to or better than Flash memory (the write speed is 20 times faster than Flash). Memory architectures based on the individual memory cells demonstrated here could enable the printing of the more complex, embedded computing devices that are expected to make up an internet of things.

Recently, the exploration of three-dimensional printing techniques to fabricate electronic materials began. A suitable general-purpose conductive thermoplastic filament was not available, however. In this work I examine the current state of conductive thermoplastic filaments, including a newly-released highly conductive filament that my lab has produced which we call Electrifi. I focus on the use of dual-material fused filament fabrication (FFF) to 3D print electronic components (conductive traces, resistors, capacitors, inductors) and circuits (a fully-printed high-pass filter). The resistivity of traces printed from conductive thermoplastic filaments made with carbon-black, graphene, and copper as conductive fillers was found to be 12, 0.78, and 0.014 ohm cm, respectively, enabling the creation of resistors with resistances spanning 3 orders of magnitude. The carbon black and graphene filaments were brittle and fractured easily, but the copper-based filament could be bent at least 500 times with little change in its resistance. Impedance measurements made on the thermoplastic filaments demonstrate that the copper-based filament had an impedance similar to a conductive PCB trace at 1 MHz. Dual material 3D printing was used to fabricate a variety of inductors and capacitors with properties that could be predictably tuned by modifying either the geometry of the components, or the materials used to fabricate the components. These resistors, capacitors, and inductors were combined to create a fully 3D printed high-pass filter with properties comparable to its conventional counterparts. The relatively low impedance of the copper-based filament enable its use to 3D print a receiver coil for wireless power transfer. We also demonstrate the ability to embed and connect surface mounted components in 3D printed objects with a low-cost ($1,000 in parts), open source dual-material 3D printer. This work thus demonstrates the potential for FFF 3D printing to create complex, three-dimensional circuits composed of either embedded or fully-printed electronic components.