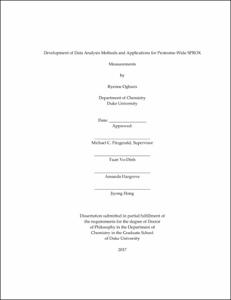 Protein-ligand interactions can be detected and quantified using protein folding stability measurements. Thus, protein folding stability changes are closely linked to protein function and are an important biophysical measurement. Stability of Proteins from Rates of Oxidation (SPROX) is one approach for making proteome wide stability measurements on proteins. Previous SPROX data analysis strategies relied heavily on visual inspection of the data to identify protein stability changes. This created a bottleneck in the analysis and chances for human error. As part of this work, several new data analysis strategies were evaluated using data from previously reported ligand-binding studies. One strategy, the so-called difference analysis, was determined to be the data analysis strategy of choice as it minimized false positive and negatives. The difference analysis strategy was applied to identify protein targets of the breast cancer therapeutic tamoxifen (TAM) and its active metabolite 4-hydroxytamoxifen (4OHT) in yeast and protein targets of TAM and its most abundant metabolite n-desmethyl tamoxifen (NDT) in MCF-7 cell lysate. Several yeast protein targets of TAM and 4OHT were identified using SPROX, and they were subsequently validated using a pulse proteolysis strategy. The proteins in an MCF-7 cell line were probed for TAM- and NDT-induced stability changes using the SPROX in combination with two different quantitative proteomics strategies. Together the SPROX experiments on the proteins in an MCF-7 cell lysate enabled over 1000 proteins to be assayed for TAM- and NDT- induced protein stability changes. Ultimately, a total of 163 and 200 proteins with TAM- and NDT-induced stability changes were identified, respectively. A subset of 33 high confidence hits, including those identified using both proteomics strategies or those identified with multiples peptide probes, were assessed for experimental links to the ER using a STRING analysis. One high confidence protein hit, Y-box binding protein 1 (YBX1), was recently shown to bind the estrogen receptor, which is the known target of TAM. Preliminary results generated here using pulse proteolysis and a purified recombinant YBX1 protein construct suggest that YBX1 is a direct protein target of TAM. Proteins with altered expression levels with TAM and NDT treatment were also identified here. In total, 799 and 671 proteins were probed for TAM- and NDT- induced expression changes, respectively, and 49 and 30 proteins had altered expression. Out of the 49 and 30 proteins with TAM- and NDT- induced expression changes, 14 and 4 proteins had TAM- and NDT- induced altered stability, respectively. In addition to the above ligand-binding studies, SPROX was utilized to characterize the stability of the allergen containing proteomes of the European house dust mite, timothy grass pollen, and ragweed pollen. It was determined that the protein allergens in these proteomes were more stable and more abundant (based on transcriptomic data), than non-allergen proteins from these sources.