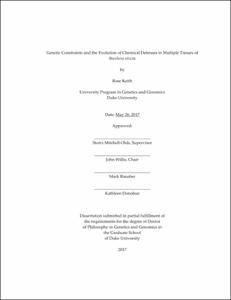 In order to deter herbivores, plants evolve defenses suited to different tissues and varying patterns of herbivory. If the defense profiles of different tissues share common genetic controls but differ in selective pressures, evolution of effective defenses within the whole plant may be constrained. In my dissertation, I investigate how glucosinolates, biologically active secondary metabolites, evolve in multiple tissues of the crucifer Boechera stricta. I quantify variation in glucosinolate concentration and the relative ratio of each glucosinolate compound (hereafter called the glucosinolate profile) between leaves and fruits and find support for the optimal defense hypothesis, which predicts a higher concentration of glucosinolates in higher-value tissues. Using a large-scale common garden experiment within a population, I demonstrate that antagonistic selection between tissues and genetic covariances in glucosinolate profile between leaves and fruits exercise strong constraint on the evolution of defenses. Additionally, I compare the structure of genetic variances and covariances (the G-matrix) among four genetically differentiated groups of B. stricta and find that the structure of the G-matrix can be altered within approximately 5,000 generations. An Fst-Qst analysis reveals that some differences in glucosinolate profile between were driven by selection.