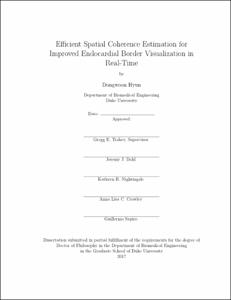 Coronary heart disease contributed to approximately one in four deaths in the United States in 2014, and is caused by a restriction of blood flow to myocardial tissue. Stress echocardiography is a clinical technique used to assess myocardial ischemia by observing changes (or lack thereof) in ventricular wall motion in response to cardiac stress. The American Society of Echocardiography (ASE) recommends that left ventricle functionality be quantified using a 16 or 17 segment model of the left ventricle (LV). To properly assess the function of the ventricle, clear endocardial border delineation is necessary.

However, an increasing prevalence of obesity has been linked to a rise in the number of unreadable ultrasound scans. Image degradation is attributed to tissue inhomogeneities and subcutaneous fat layers, giving rise to phase aberration errors and acoustical clutter from near-field reverberation. In the event that two or more segments are inadequately visualized, the ASE recommends the use of contrast agents. Though contrast agents are effective, they are invasive and increase the procedure time and costs.

Recent work has shown that clutter can be suppressed using a novel image reconstruction technique based on the second order statistics of ultrasound echoes called short-lag spatial coherence (SLSC). Unlike conventional B-mode imaging, which forms images of the echo magnitude, SLSC forms images of the spatial coherence of the echo. By suppressing clutter, a sufficient improvement in the visualization of the endocardial border could minimize the need for contrast agents and potentially reduce the level of expertise necessary to interpret images. Though promising in preliminary studies, SLSC has a high computational demand that limited previous studies to offline image reconstruction. The goal of this research was to implement spatial coherence imaging in real-time, and to assess its performance in echocardiography.

First, the existing spatial coherence estimation methodology was investigated, and three computationally efficient modifications were proposed: a reduced kernel, a downsampled receive aperture, and the use of an ensemble correlation coefficient. The proposed methods were implemented in simulation and in vivo studies. Reducing the kernel to a single sample improved computational throughput and improved axial resolution. Downsampling the receive aperture was found to have negligible effect on estimator variance, and improved computational throughput by an order of magnitude for a downsample factor of 4. The ensemble correlation estimator was found to have lower variance than the currently used average correlation estimator. Combining the three methods, the throughput was improved 105-fold in simulation with a downsample factor of 4 and 20-fold in vivo with a downsample factor of 2.

The improved spatial coherence estimation methodology was implemented using a GPU-based software beamformer to develop a real-time SLSC imaging system suitable for echocardiography. The system went through several iterations, with the final form consisting of a stand-alone CUDA C++ library for GPU-based beamforming, and a second CUDA C++ library to interface a research ultrasound scanner with the first. The resulting system was capable of live spatial coherence imaging at more than 30 frames per second, a rate sufficient for echocardiography.

The system was then used in a clinical study to image 15 stress echocardiography patients with poor image quality. A fundamental and harmonic imaging study was conducted. The latter study, which had greater clinical significance, was an assessment of the visibility of 17 LV segments using conventional tissue harmonic imaging (THI) and harmonic spatial coherence imaging (HSCI). A cardiologist rated the visibility of each of 17 LV segments as 0=invisible, 1=poorly visualized, or 2=well visualized, where scores of 0 and 1 indicated a need for contrast agent. There was a clear superiority of HSCI over THI in a comparison of overall segment scores (p < 0.0001 by symmetry test unadjusted for clustering). When comparing the number of segments with clinically acceptable image quality per patient, HSCI again showed superiority over THI (p < 0.0001 by McNemar test adjusted for clustering). In one patient, HSCI improved visualization sufficiently to eliminate the need for contrast agents altogther. These results indicate that spatial coherence imaging may provide sufficient improvements in LV wall visualization in certain patients to proceed without contrast agents.

The research in spatial coherence estimation techniques also proved fruitful in other areas of ultrasound imaging, such as ultrasound molecular imaging (USMI). USMI is accomplished by detecting microbubble (MB) contrast agents that have bound to specific biomarkers, and can be used for the early detection of cancer. However, USMI in humans is challenging because of the signal degradation caused by the presence of heterogenous subcutaneous tissue. In a phantom and in vivo study, USMI performance was assessed using conventional contrast-enhanced ultrasound (CEUS) imaging and SLSC-CEUS. In a USMI-mimicking phantom, SLSC-CEUS was found to be more robust than DAS to additive thermal noise, with a 9 dB and 15 dB SNR improvement without and with -6 dB thermal noise, respectively. USMI performance was also measured in vivo using VEGFR2-targeted MBs in mice with subcutaneous human hepatocellular carcinoma tumors. SLSC-CEUS improved the SNR in each of 10 tumors by an average of 65%, corresponding to 4.3 dB SNR. These results indicate that the SLSC beamformer is well-suited for USMI applications because of its high sensitivity and robust properties.

These studies are a demonstration of the feasibility of real-time spatial coherence imaging using current technology, and an exposition of its utility in medical ultrasound imaging.