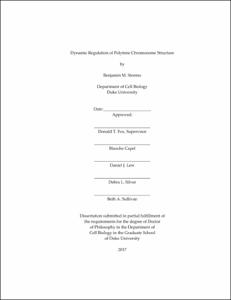 Polyploid cells are generated through a cell cycle variant termed the endocycle. Endocycling cells undergo multiple rounds of genome duplication without an intervening mitosis. Endocycling is known to lead to alterations in chromosomes structure that make mitosis “ill advised”, in the words of one review. However, many polyploid cells retain mitotic capacity, both when polyploidy is induced pathologically, and in some developmental contexts. Using two mitotic polyploid cell types in Drosophila melanogaster, I investigated how chromosomes structure is regulated in pathological and developmental endocycles. By combining genetics, live imaging and chromosome cytology I have discovered two phases of chromosome regulation that, together, ensure accurate mitosis in polyploid cells. The first of these occurs during the endocycle when removal of sister chromatid cohesin by pds5, without mitosis, allows for the formation of paired chromatids. We named this process “cohesin disestablishment”. Secondly, during cell division, mad2 controls the length of mitosis which allows time for sister chromatids to separate into pairs. We named this process “Separation Into Recent Sisters” (SIRS). Together, cohesin disestablishment and SIRS, allow the accurate segregation of chromosomes in polyploid mitotic cells.