Host Constraints on the Post-glacial Migration History of the Parasitic Plant, Epifagus Virginiana 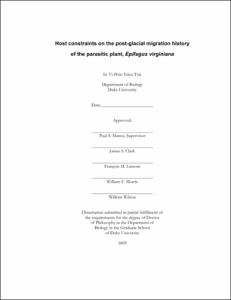 Because species respond individually to climate change, understanding community assembly requires examination of multiple species from a diversity of forest niches. I present the post-glacial phylogeographic history of an understory, parasitic herb (<italic>Epifagus virginiana</italic>, beechdrop) that has an obligate and host specific relationship with a common eastern North American hardwood tree (<italic>Fagus grandifolia</italic>, American beech). The migration histories of the host and parasite are compared to elucidate potential limits on the parasite's range and to understand their responses to shared climate change. Two chloroplast DNA regions were sequenced and 9 microsatellite loci genotyped from parasite specimens collected throughout the host's range. These data were compared with available cpDNA sequences from the host (McLachlan et al. 2005) and host fossil pollen records from the last 21,000 years (Williams et al. 2004). Analyses of genetic diversity reveal high population differentiation in the parasite's southern range, a possible result of long term isolation within multiple southern glacial refuges. Estimates of migration rates and divergence times using Bayesian coalescent methods show the parasite initiating its post-glacial range expansion by migrating northward into the northeast from southern areas, then westward into the midwest, a pattern consistent with the development of high density beech forests. This result is strongly confirmed through spatial linear regression models, which show host density plays a significant role in structuring parasite populations, while the initial migration routes of the host are irrelevant to parasite colonization patterns. Host density is then used as a proxy for the parasite's habitat quality in an effort to identify the geographic locations of its migration corridors. Habitat cost models are parameterized through use of the parasite's genetic data, and landscape path analyses based on the habitat map show a major migration corridor south of the Great Lakes connecting the northeast and midwest. Host density was the major determinant controlling the parasite's range expansion, suggesting a lag time between host and parasite colonization of new territory. Parasites and other highly specialized species may generally migrate slower due to their complex landscape requirements, resulting in disassociation of forest assemblages during these times. From these results, the low migration capacities of highly specialized species may be insufficient to outrun extirpation from their current ranges.