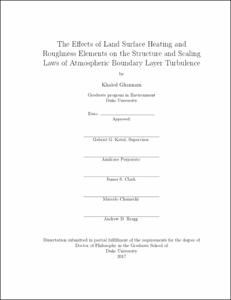 The atmospheric boundary-layer is the lowest 500-2000 m of the Earth's atmosphere where much of human life and ecosystem services reside. This layer responds to land surface (e.g. buoyancy and roughness elements) and slowly evolving free tropospheric (e.g. temperature and humidity lapse rates) conditions that arguably mediate and modulate biosphere-atmosphere interactions. Such response often results in spatially- and temporally-rich turbulence scales that continue to be the subject of inquiry given their significance to a plethora of applications in environmental sciences and engineering. The work here addresses key aspects of boundary layer turbulence with a focus on the role of roughness elements (vegetation canopies) and buoyancy (surface heating) in modifying the well-studied picture of shear-dominated wall-bounded turbulence. A combination of laboratory channel experiments, field experiments, and numerical simulations are used to explore three distinct aspects of boundary layer turbulence. These are:

\item The concept of ergodicity in turbulence statistics within canopies: It has been long-recognized that homogeneous and stationary turbulence is ergodic, but less is known about the effects of inhomogeneity introduced by the presence of canopies on the turbulence statistics. A high resolution (temporal and spatial) flume experiment is used here to test the convergence of the time statistics of turbulent scalar concentrations to their ensemble (spatio-temporal) counterpart. The findings indicate that within-canopy scalar statistics have a tendency to be ergodic, mostly in shallow layers (close to canopy top) where the sweeping flow events appear to randomize the statistics. Deeper layers within the canopy are dominated by low-dimensional (quasi-deterministic) von K{\'a}rm{\'a}n vortices that tend to break ergodicity.

\item Scaling laws of turbulent velocity spectra and structure functions in near-surface atmospheric turbulence: the existence of a logarithmic scaling in the structure function of the longitudinal and vertical velocity components is examined using five experimental data sets that span the roughness sub-layer above vegetation canopies, the atmospheric surface-layer above a lake and a grass field, and an open channel experiment. The results indicate that close to the wall/surface, this scaling exists in the longitudinal velocity structure function only, with the vertical velocity counterpart exhibiting a much narrower extent of this range due to smaller separation of scales. Phenomenological aspects of the large-scale eddies show that the length scale formed by the friction velocity and energy dissipation acts as a dominant similarity length scale in collapsing experimental data at different heights, mainly due to the imbalance between local production and dissipation of turbulence kinetic energy.

\item Nonlocal heat transport in the convective atmospheric boundary-layer: Failure of the mean gradient-diffusion (K-theory) in the convective boundary-layer is explored. Using large eddy simulation runs for the atmospheric boundary layer spanning weakly to strongly convective conditions, a generic diagnostic framework that encodes the role of third-order moments in nonlocal heat transport is developed and tested. The premise is that these nonlocal effects are responsible for the inherent asymmetry in vertical transport, and hence the necessary non-Gaussian nature of the joint probability density function (JPDF) of vertical velocity and potential temperature must account for these effects. Conditional sampling (quadrant analysis) of this function and the imbalance between the flow mechanisms of ejections and sweeps are used to characterize this asymmetry, which is then linked to the third-order moments using a cumulant-discard method for the Gram-Charlier expansion of the JPDF. The connection between the ejection-sweep events and the third-order moments shows that the concepts of bottom-up/top-down diffusion, or updraft/downdraft models, are accounted for by various quadrants of this joint probability density function.

To this end, future research directions that build upon this work are also discussed.