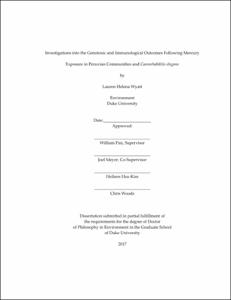 Mercury is a pollutant of global concern and is considered a priority compound to many organizations, including the Agency for Toxic Substances and Disease Registry (ATSDR), the US Environmental Protection Agency (USEPA), the World Health Organization (WHO), and the United Nations Environment Programme (UNEP), due to mercury’s toxicity profile and the potential for human exposure (ATSDR, EPA, WHO, UNEP) (USEPA 2014, ATSDR 2015). Toxic outcomes depend greatly on the chemical compound, as adverse nervous system impacts are associated with organic mercury exposures and renal system impacts with elemental and inorganic mercury exposures (Lebel et al. 1996, Drake et al. 2001, Jarosinska et al. 2008). In particular, developmental delays and nervous system impacts occur at low dose exposures (Grandjean et al. 1997, NRC 2000). Chronic exposure has broad impacts from disrupting many cellular processes, including genotoxic and immunomodulatory impacts (Asmuß et al. 2000, Gallagher et al. 2011), however, the extent of impacts from chronic low-dose exposures is not well understood. Understanding the impacts of chronic low-dose exposures is important because globally many populations, including US coastal populations, have this type of exposure from regularly consuming seafood contaminated with methylmercury and because in some regions the risk for this type of exposure is increasing. Populations near artisanal and small-scale gold mining (ASGM), which uses mercury in the process to retrieve gold, have increased risk for chronic exposure. In some regions ASGM is rapidly expanding (Swenson et al. 2011, Emel et al. 2014, Snapir et al. 2017), increasing the concern for human health risks.

The goals of this dissertation were to investigate mercury’s influence on mitochondrial toxicity, focusing on genotoxic and immunotoxic endpoints, and determine the extent that co-exposures, including selenium and other dietary factors, modify exposure and adverse outcomes. Mercury has the potential to induce DNA damage indirectly through inducing reactive oxygen species (ROS) that damage DNA (Yee and Choi 1996, Ni et al. 2010) and impair DNA repair enzymes (Crespo-Lopez et al. 2009). Studies to date have primarily assessed nuclear DNA damage, and though mitochondrial damage is plausible, it has not been directly measured. Concerning immune impacts, in both laboratory and field animal studies, mercury exposure induces T-cell mediated immunosuppression and reduced antibody titers (Koller 1973, Snoeijs et al. 2004, Hawley et al. 2009, Fallacara et al. 2011b, a). There is also evidence for immunomodulation in humans including altered innate and adaptive immune responses, but this data has not been consistent between studies (Gardner et al. 2010b, Heilmann et al. 2010a, Gallagher et al. 2011). Diet and nutritional status appear to be important modifying factors to neurotoxic and immune outcomes. Omega-3 fatty acids have beneficial impacts on neurological development and mitigate mercury induced neruotoxicity to an extent (Oken et al. 2005). When nutritional status was considered in a US population, mercury significantly reduced measles and rubella antibody concentrations in the majority of children and was associated with an increase in antibodies in a nutritionally deficient subpopulation (vitamin B12, folate) (Gallagher et al. 2011, Gallagher et al. 2013).

In order to address these goals, laboratory and human studies were conducted. Laboratory studies using Caenorhabditis elegans were utilized to test the hypothesis that the mitochondrial DNA (mtDNA), and thus mitochondria in general, may be more susceptible to damage from being spatially closer to ROS production and from having different DNA repair pathways from nuclear DNA repair. To test this hypothesis DNA damage and repair, mitochondrial parameters such as DNA copy number and steady-state ATP levels were measured. Results suggested that co-exposures to stressors including H2O2 and UVC were important to DNA damage and mitochondrial impacts. Though exposure to MeHg and HgCl2 increased nuclear and mitochondrial DNA damage, mtDNA damage was particularly increased with MeHg and H2O2 co-exposure. MeHg co-exposures with both DNA damage agents also decreased mtDNA copy number by approximately 60%. Species dependent impacts were also observed with ATP levels. For the hypothesis that innate immune signaling may be altered, experiments focused on PMK-1, a p38 mitogen-activated protein kinase that has a protective role in infection and is required for immune induction, and measured the survival of immunocompetent nematodes (pmk-1) and expression of genes involved in the PMK-1 pathway. I observed that both MeHg and HgCl2 impact this pathway as both mercury species reduced pmk-1 expression.

Cross-sectional human studies were used to identify factors important to mercury exposure and determine the influence of nutritional status and mercury exposure on child immune response to immunization. Human studies were conducted communities located near ASGM in Madre de Dios, Peru. Important findings included that reduced mercury exposure, using hair mercury content as a proxy, was associated with frequent consumption of antioxidant-rich dietary items including quinoa, kiwicha, and some fruits. Similar to co-exposures, co-morbidity was also important to child immune response to routine vaccinations, though the direction of impact was not identical for all antibodies analyzed. Children that had high mercury exposure and were anemic had increased antibodies in some cases (total IgG and measles) and reduced antibodies for others (hepatitis B, Hib, and pertussis). These observations indicate that while mercury has impacts on adaptive immunity and disease susceptibility, the impacts may not be the same for all diseases.

In conclusion, I observed that mitochondrial toxicities are dependent on mercury species, that frequent consumption of antioxidant rich dietary items is associated with lower mercury exposure, and that nutritional status can influence mercury related immune outcomes. This work demonstrated the importance of considering co-exposures and co-morbidities when assessing mercury exposure impacts and highlights potential health hazards that include mitochondrial and immune system impacts.