Migration, Polarization, and Sorting in the American Electorate 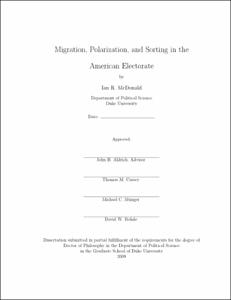 Geographic clustering has been linked to contemporary political polarization by jour- nalists and other researchers in recent years, most recently and notably by Bishop and Cushing (2008). In these accounts, clustering is motivated, in part, by shared tastes for combinations of place attributes that attract individuals with interrelated values and similar characteristics or skillsets. In order to test whether political pref- erences aligns with location choice, this paper proposes a sorting model based on the composition of migrants' political preferences.

Sorting is defined as the increase in the variation of a parameter of preference distributions of different location, in the absence of individual preference change. The model estimates the separate prob- abilities of party identification in U.S. congressional districts among migrants and non-migrants.

Based on an empirical application using the 2006 Cooperative Congressional Elec- tion Study, I find that a significant number of district satisfy the sorting condition. Aa multinomial logit model predicts that individual ideology is significant explana- tory variable in the partisanship of destination districts among migrants, even after controlling for the partisanship of originating districts.

The final chapter evaluates sorting and polarization in U.S. congressional districts based on intra-decade changes to population size. I show that overall polarization in high growth districts exceeds sorting, and suggest this results from an increase in electoral bias that could result from heavy migration into districts that begin the decade as very homogenous.