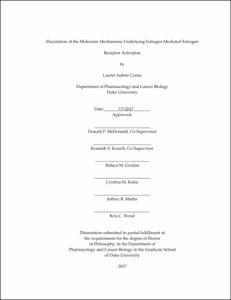 Every cell in our body contains the same genetic material, but what differentiates one cell type from another is the way in which that material is interpreted. Hidden in the 98% of non-coding DNA sequences, once referred to as “junk DNA,” are the instructions for how to turn genes on and off (i.e., the operating system). As in any other language, decoding the instructions between DNA and gene expression is the key for understanding transcriptional regulation. Without understanding the grammar of transcriptional regulation, we cannot tell which sequence changes affect gene expression and how.

In this study, we have focused on defining the mechanisms mediating gene expression in response to steroid hormones (predominantly 17β-estradiol) as a model system for other non-steroid transcription systems that can be exploited to define general principals governing steroid responsiveness upon target genes. In particular, we have demonstrated that DNA sequence constraints define the functionally active steroid nuclear receptor (sNR) gene regulatory elements in the genome, and this functionality is restricted to elements that vary from the consensus palindromic elements by one or two nucleotides, named nuclear receptor functional enhancers (NRFEs). At NRFEs, the chromatin binding of steroid nuclear receptors is not only correlated with active eRNA production, but also RNAPII occupancy as well as hormone-dependent coregulator and transcription factor (TF) recruitment. Moreover, steroid nuclear receptors with mutated DNA binding domains (DBD), were shown to still interact with chromatin, yet lack hormone-dependent transcriptional activity, highlighting the fact that steroid nuclear receptors can interact with chromatin in a transcriptionally inactive state (i.e., the majority of sNR chromatin interacting events identified in ChIP studies are not linked directly to transcriptional events) (Chapter 2). We further demonstrate that the palindromic architecture of the regulatory element is the underlying mechanism that governs chromatin interaction by steroid nuclear receptors, and the non-functional chromatin interacting sites (non-NRFEs) observed in ChIP-seq studies are subject to the same rules and constraints as NRFEs. Thus, NRFE vs. non-NRFE binding is dictated at the individual nucleotide level, and the residence time (or strength of binding) is determined by the number and locations of variants within the consensus element. The basis of these rules and DNA constraints follow specific algebraic relationships. These findings quantitatively define how steroid nuclear receptors select the ‘appropriate’ regulatory targets out of a very large number of highly similar sequences in the genome, thus eliciting a specific cellular response (Chapter 3).

Our understanding of the physiology and transcriptional regulation of steroid hormones was significantly advanced following the generation of mutant mouse models possessing disruptions (knockouts) of the steroid nuclear receptor genes. In this study, we identified the molecular defects caused by a homozygous missense mutation in ERα identified in an 18 year-old woman with complete estrogen insensitivity syndrome; a clinical presentation similar to those of ERα knockout (αERKO) female mice. From these studies, we identified a potential therapeutic, Diethylstilbestrol (DES), for treating this estrogen insensitivity condition. Treatment of this patient with DES is underway and we remain involved as collaborators in this clinical study. Our studies also characterize the molecular defects caused by a different homozygous mutation in ERα identified in two sisters and a brother that likewise exhibit complete estrogen insensitivity (Chapter 5).

Hormone-dependent transcriptional regulation requires the recruitment of coregulators to the regulatory regions of target genes. This recruitment is determined by the overall surface topography of the sNR. Phage display is a widely-used research technique for screening highly diverse peptide libraries to enrich for sNR-binding clones. It requires two primary components for affinity selection: (1) a phage display cDNA library, and (2) purified recombinant sNR protein. High level expression of soluble biologically-active sNR protein is particularly challenging due to its largely hydrophobic ligand binding domain. In this study, we overcame this challenge by constructing a protein expression system that provides the factors responsible for protein folding of sNRs (Hsp90, Hsp40, Hsp70, Hop and p23) at levels comparable with the amount of over expressed sNR (Chapter 6). Affinity selection in phage display involves panning of a phage library to enrich for sNR-binding clones followed by their amplification. This amplification step enriches for clones that have a growth advantage, introducing bias into the selection that favors faster growing clones regardless of the selection pressure. To eliminate this bias, individual phage must be separated into different growth chambers so they cannot compete for bacterial hosts. To do this, we used microfluidic flow-focusing technology (MFFT) to generate monodisperse droplet based compartments to encapsulate individual phage clones and achieve non-competitive amplification of millions of phage clones having different growth characteristics. The elimination of growth-based competition ensures that selection of binding clones is driven only by the binding strength of each clone for the sNR. The successful development of a MFFT platform and proof of principal demonstration, allowed us to then implement a high throughput MFFT droplet system. This project was the first application to introduce this novel technology to the National Institute of Environmental Health Sciences (NIEHS) (Chapter 6).

Transcriptional regulation takes place at the level of single cells. However, many traditional techniques involve homogenizing tissue samples composed of millions of cells, and thus can only deal with population averages. Single-cell sequencing reveals the inherent properties of a single cell from the large scale of the genome, information critical for understanding cellular heterogeneity in cancer and response/resistance to therapy. Using our new high throughput MFFT droplet system, genome-wide gene expression profiling of individual cells can be done by separating thousands of individual cells into nanoliter-sized aqueous droplets, associating a different barcode with each cell’s RNAs, and sequencing them all together. This results in transcripts from thousands of individual cells that are all identified by their cell of origin. Here, we establish a droplet microfluidic method to sequence genomes of single cells from dissociated, complex tissues using a custom fluorosurfactant (i.e., a triblock copolymer consisting of a polyethylene glycol (PEG) center block covalently bound to two perfluorinated polyether (PFPE) blocks by amide linking groups), to address two of the major challenges in performing biological, drop-based assays: to stabilize aqueous droplets in fluorocarbon oils and to make the droplets compatible with biological molecules and cells (Chapter 6).

Post-translational modification by SUMO is an important mechanism to regulate transcription. Tamoxifen is used in the treatment and prevention of ER positive breast cancer. Tamoxifen is metabolized predominantly by the cytochrome P450 system to several primary and secondary metabolites, some of which exhibit more antiestrogenic effects than tamoxifen itself. In this study, we demonstrate that the more antiestrogenic effect of endoxifen versus tamoxifen is due post-translational modification by SUMO and inhibition of SUMO derepresses endoxifen’s anti-estrogenic activity. This mechanism of transcriptional repression was also demonstrated in other antiestrogens including fulvestrant, raloxifene, bazedoxifene, idoxifene and lasofoxifene (Chapter 7).