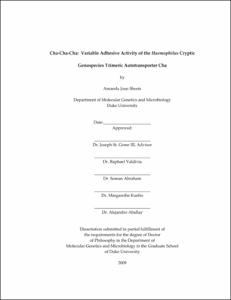 Disease caused by the Gram-negative <italic>Haemophilus</italic> cryptic genospecies begins with colonization of the maternal genital or neonatal respiratory tract. The primary goal of this work was to identify and characterize the molecular determinant(s) of <italic>Haemophilus<i/talic> cryptic genospecies adherence as a means to better understand the specific adaptation of this species to the urogenital tract and neonatal respiratory tract. Using transposon mutagenesis of prototype strain 1595, we identified a locus that is essential for <italic>Haemophilus</italic> cryptic genospecies adherence to a variety of epithelial cell lines of both genital and respiratory origin. This locus encodes a protein called Cha that shares homology with trimeric autotransporters. Trimeric autotransporters are composed of an N-terminal signal peptide, an internal passenger domain that harbors adhesive activity, and a short C-terminal membrane anchor domain and are classically characterized by head-stalk-anchor domain architecture. By generating chimeric proteins, we demonstrated that the C-terminus of Cha trimerizes in the bacterial outer membrane and is capable presenting a heterologous passenger domain (Hia) in a functional form, thus confirming that Cha is a trimeric autotransporter. Southern analysis revealed that <italic>cha</italic> is unique to the <italic>Haemophilus</italic> cryptic genospecies and is ubiquitous among these strains.

Similar to a number of trimeric autotransporters, the passenger domain of Cha contains scattered clusters of YadA-like head domains associated with head-to-stalk neck adaptor motifs, predicted coiled-coil stalks and a series of identical tandem coding repeats which are not required for adherence. By evaluating the adherence capacity of <italic>H. influenzae</italic> expressing Cha deletion derivatives, we established that the N-terminal 473 residues of Cha harbor the binding domains responsible for Cha-mediated adherence to epithelial cells. In additional studies, we demonstrated that this same N-terminal region mediates bacterial aggregation through inter-bacterial Cha-Cha binding.

Further analysis revealed that variable Cha-mediated adherence is linked to spontaneous changes in the number of identical tandem repeats predicted to comprise a coiled-coil stalk domain. Variation in repeat copy number has a direct effect on Cha adhesive and aggregative activity, independent of an impact on transcription of the <italic>cha</italic> locus or surface localization of Cha protein. Moreover, length of Cha surface fibers correlates with repeat copy number expansion. We propose two hypotheses to explain how repeat expansion inhibits bacterial aggregation and host cell binding: 1) Variation in the number of 28-amino acid repeats may influence the conformation of Cha, thus changing the surface accessibility of the Cha binding pocket. 2) Repeat expansion results in the formation of long, flexible Cha fibers on the bacterial cell surface that may have a greater propensity to interact with neighboring Cha trimers at the N-terminus, thereby precluding adherence to other bacteria or host epithelial cells.

In additional studies screening adherent cryptic genospecies isolates for expression of Cha protein, we identified an additional, antigenically-divergent Cha variant that we refer to as Cha2. Amino acid sequence and domain comparison of Cha2 with Cha (now Cha1) revealed that the structurally undefined N-terminal sequences (encompassing the Cha1 adhesive and aggregative domain) are strikingly divergent. Inspite of this, Cha2 mediates efficient adherence to human epithelial cells, similar to Cha1.

Identification of Cha offers insight into the apparent tissue tropism associated with the <italic>Haemophilus</italic> cryptic genospecies. We speculate that the unique regulation of Cha adhesive activity enhances the adaptive capability of this pathogenic organism in the human host.