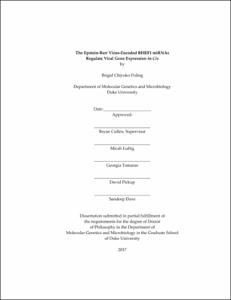 Epstein Barr virus (EBV), a γ-herpesvirus that latently infects over 90% of the adult population, is known to play a role in the development of both B cell and epithelial cell tumors. In a laboratory setting, transformation of primary B cells into lymphoblastoid cell lines (LCLs) is used to model EBV infection and latency. LCLs have a latency III gene expression profile akin to the EBV-associated tumors diffuse large B cell lymphoma (DLBCL) and post-transplant lymphoproliferative disorder (PTLD). During latency III, EBV expresses the full repertoire of latency genes including two microRNA (miRNA) clusters, the BHRF1 cluster and the BART cluster. The BHRF1 miRNA cluster is composed of three virally encoded primary miRNAs (pri-miRNAs) which are processed into four highly expressed mature ~22nt miRNAs that target mRNA for translational inhibition or degradation: miR-BHRF1-1, 1-2, 1-2*, and 1-3. Virally encoded miRNAs have been shown to enhance pathogenesis by inhibition of cellular genes. Thus, characterizing the role the BHRF1 miRNAs during latency is important for understanding EBV pathogenesis.

Collectively, the BHRF1 miRNAs are crucial for EBV-induced transformation of primary B cells into LCLs. They also play a role in LCL proliferation by enhancing cell cycle progression of LCLs. However, the individual roles of the miRNAs in the BHRF1 cluster were previously not known. We sought to address this gap in knowledge by ectopically expressing the BHRF1 miRNA cluster in LCLs transformed with an EBV bacmid that lacks the BHRF1 miRNAs (∆123 LCLs). We hypothesized that ectopic expression of the BHRF1 miRNAs would rescue the growth deficiency of ∆123 LCLs. Because of technical difficulties inherent to previously established lentiviral vectors we developed a new lentiviral vector bearing a reverse intron (pTREX) to express the BHRF1 miRNAs at physiological levels. We demonstrated by flow cytometry, Western blot, and TaqMan qPCR that pTREX was better at expressing transgenes and miRNAs than a lentiviral vector without an intron (pTRIPZ). We additionally showed by infection assays that pTREX generated higher viral titers than pTRIPZ when encoding a cluster of miRNAs. Thus, we were able to use the pTREX vector to show that ectopic expression of the BHRF1 miRNAs at WT levels in ∆123 LCLs does not rescue the ∆123 LCL growth deficiency.

Since the BHRF1 miRNAs did not regulate growth through their canonical role in trans, we investigated other processes that were dysregulated in ∆123 LCLs. In doing so, we demonstrated that the BHR1-2 and 1-3 pri-miRNAs play a novel role in viral gene expression. Processing, by the RNAse III protein Drosha, of the BHRF1 miRNAs out of EBNA-LP transcripts, as part of the miRNA biogenesis pathway, allows the BHRF1 miRNAs to regulate EBNA-LP expression in cis. We used a meta-analysis of RNA-Seq data and performed PacBio sequencing to show that splicing from EBNA-LP to the HF exon, which contains the BHRF1-2 and 1-3 pri-miRNAs, occurs at a high frequency. This had not been previously established due to the limitations of short reads used in RNA-Seq analysis. Our PacBio sequencing also revealed several novel splice junctions that prevent expression of EBNA-LP from the Cp and Wp promoters. We also show, using a reporter assay, that the BHRF1-2 and 1-3 pri-mRNAs are able to regulate gene expression in cis in a Drosha-dependent manner. Furthermore, targeting of the HF exon with amiRNAs was capable of reducing EBNA-LP expression. We propose that during EBV infection the BHRF1 miRNAs are encoded in the 3’UTR of EBNA-LP, and that their processing by Drosha regulates EBNA-LP protein expression. We show, by 4SU labeling of nascent transcripts and Western blot, that the increase in EBNA-LP protein expression observed in ∆123 LCLs is correlated with an increase in EBNA-LP regulated transcripts and proteins. Taken together, we developed a new lentiviral vector, pTREX, which allows for high protein and miRNA expression, and revealed that the growth deficit of ∆123 LCLs is not due to miRNA regulation of cellular mRNAs in trans. By contrast, we demonstrate a novel role of the BHRF1 miRNAs in regulating the expression of the virally-encoded EBNA-LP protein through Drosha processing in cis. This is an underappreciated role for miRNAs as there are very few examples of Drosha processing regulating gene expression in cis. These results suggest that regulation of EBNA-LP expression as important for LCL growth and transformation. Further studies examining the role of EBNA-LP expression are necessary for understanding EBV-induced transformation.