Functional Analysis of the Cordon-bleu Protein in Mouse 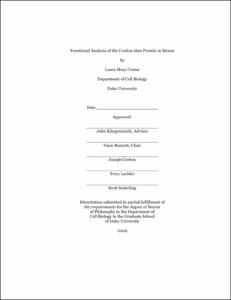 The actin cytoskeleton is a fundamental component of the cell and is involved in many processes, including cell division, cell migration, vesicle trafficking and cell polarity. The actin cytoskeleton has a very important role in embryogenesis as the cells within developing tissues proliferate, migrate, interpret extracellular cues, and shape complex tissues. The molecules that help the cell to interpret their environment and turn those cues into morphological changes are of great interest. One protein which may be involved in this manner is Cordon-bleu (Cobl).

In mouse embryos, <italic>Cobl's</italic> expression pattern resembles that of important developmental genes, is restricted to distinct domains, and changes dynamically throughout development as tissues are formed. While it is known that <italic>Cobl</italic> expression is regulated by developmental signaling pathways such as Shh and BMP, its molecular function at the cellular level remains elusive. In this study, we have identified molecular functions of Cobl. Cobl has C-terminal Wasp Homology-2 (WH2) domains which bind actin and nucleate new actin filaments in <italic>in vitro</italic> polymerization assays. Using cultured cells, we have determined that Cobl is involved in cytoskeletal remodeling during neurite branching and epithelial cell migration. We also demonstrate that Cobl interacts with the Syndapin family of adaptor proteins that link endocytosis and vesicle trafficking. Cobl colocalizes with Sdp2 in cultured epithelial cells and similarly localizes with Sdp1 and Sdp2 in developing mouse embryos. The localization of Cobl or Sdp2 in cultured epithelial cells is dependent on the other, as demonstrated using shRNA knockdown.