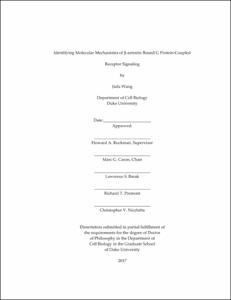 G protein-coupled receptors (GPCRs) represent the largest and the most versatile family of cell surface receptors. Members of this receptor family translate diverse extracellular cues to intracellular responses, and are commonly targeted for medicinal therapeutics. In the current model of GPCR signaling, agonist binging not only initiates G protein-mediated signaling through generation of second messengers such as cyclic AMP and diacylglycerol, but also through the multifunctional adaptor protein beta-arrestin acting as a signal transducer. While some ligands have balanced agonist activity defined as equal efficacy for G protein and beta-arrestin-mediated pathways, other ligands stimulates GPCR signaling preferentially through beta-arrestin, a concept know as beta-arrestin-biased agonism.

The beta1 and beta2 adrenergic receptors (betaARs) are the predominant GPCR subtypes expressed in the heart, and play an important role in the pathophysiology of human heart disease. Of the four families of G alpha-proteins (G alpha s, G alpha i/o, G alpha q/11 and G alpha 12/13), beta1ARs are recognized as classical G alpha s-coupled receptors since agonist binding promotes coupling to heterotrimeric G protein (G alpha-beta-gamma) triggering dissociation of G alpha s from G beta-gamma. Here, we identify a new signaling mechanism unlike that previously for any known G alpha s-coupled receptor whereby the inhibitory G protein (G alpha i) is required for beta1AR-mediated beta-arrestin-biased signaling. Stimulation with the beta-arrestin-biased agonist carvedilol induces switching of the beta1AR from a classical G alpha s-coupled receptor to a G alpha i-coupled receptor and stabilizes a unique receptor conformation required for beta-arrestin-mediated signaling. Recruitment of G alpha i was not induced by any other betaAR agonist or antagonist screened, nor was it required for beta-arrestin-bias activated by the beta2AR subtype of the betaAR family.

We also found that G alpha i is involved in the membrane stretch-induced signaling activated by the angiotensin II type 1 receptor (AT1R), another GPCR mediating a variety of physiological responses and is commonly targeted for cardiac drug therapy. It is appreciated that the AT1R can function as a mechanical sensor. When activated by mechanical stretch, AT1Rs transmit signaling through beta-arrestin, rather than the G protein pathways. To date, the ligand-independent membrane stretch-induced AT1R conformation that triggers signaling is thought to be the same as that induced by a beta-arrestin-biased agonist, which can selectively engage beta-arrestin and prevent G protein coupling. Here we show that membrane stretch promotes a distinct biased conformation of the AT1R that couples to G alpha i. In contrast, recruitment of G alpha i was not induced by the balanced agonist angiotensin II, nor by the beta-arrestin-biased agonist TRV120023. The stretch-triggered G alpha i coupling induces the recruitment and a unique conformational change in beta-arrestin2 allowing for downstream signaling such as EGFR internalization and ERK phosphorylation.

Taken together, we identified a previously unrecognized role for G alpha i in beta-arrestin-biased GPCR signaling, and suggests that the concept of beta-arrestin-bias may need to be refined to incorporate the selective bias of receptors towards distinct G protein subtypes. We also demonstrate that different mechanisms for beta-arrestin bias may be operative between the signaling induced by distinct receptor activation modes, in the case of AT1R, the beta-arrestin-biased agonists and by the ligand-independent mechanical stretch.