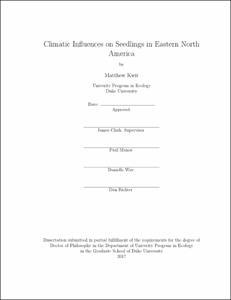 has fueled the discussion of how to mitigate climatic impacts. Climate impacts

on forests are coarsely understood. A large number of interacting environmental

factors are scarce. For this study, a large manipulative climate experiment in both

representative of the Eastern Deciduous Forest.

First, to clarify how environmental conditions of the next century will alter

seedling carbon assimilation, a hierarchical multivariate model that synthesizes over

to predict individual-level seasonal carbon budgets. This model revealed how the

balance between respiration and photosynthesis shifts with temperature, moisture,

and overstory canopy status. Furthermore, it showed that elevated temperatures

tulipifera to grow as much a 5.5 times more massive in elevated temperatures.

In addition, for certain species, demographic rates of seedlings can be scaled to

Second, the relationship between seedling size and water-use was examined.

capable of buffering environmental stress. At some intermediate size, a threshold is reached

costs of size. For two seasons of this manipulative warming experiment, 123 external

Quercus alba, and Quercus rubra). The experimental seedlings, which vary in

mass from less than a tenth of a gram to 41 grams, were included to demonstrate

that both size and species influence water use. While larger size leads to increased

and large individuals to a lesser extent. These results suggest that the seedlings of

Lastly, this climate-warming experiment was expanded to include 4000 seedlings

of 11 total species across both the northern and southern sites. High-resolution subannual

by focusing on determinate vs. indeterminate growers and the interactions

species annual growth, which is focused within the summer, is dependent

on their ability to maintain growth during increasingly warmer and dryer summers.

how growth phenology aligns with the seasonal patterns of climate change.

Questions of forest responses to climate change are multi-scaled. Responses depend

on local conditions, life-stage, natural history, and the scale of inference. Climate

a response. For this study a manipulative climate experiment was used to address