Systematics and Ecology of Truffles (Tuber) 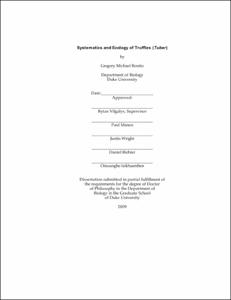 The transition to a truffle form (from an epigeous form) has occurred independently, multiple times in both the Ascomycetes and Basidiomycetes. One instance has given rise to the Tuberaceae, which is composed entirely of obligate ectomycorrhizal species. Attempts to cultivate European truffle species T. melanosporum, T. aestivum, and T. borchii are underway in North America and other parts of the world and have been met with mixed success.

The overarching goal of my dissertation is to address the systematics, ecology, and biogeography of Tuber within a phylogenetic framework. Multiple loci were sequenced from Tuber ascoma collected worldwide including ectomycorrhizae, though an emphasis was placed on sampling taxon within North American. Maximum likelihood, maximum parsimony, and Bayesian inference were used for phylogenetic reconstructions.

A taxonomic and phylogenetic overview of the family Tuberaceae is presented in Chapter 1. Tuber is resolved as monophyletic. In Chapter 2, through greater taxon sampling including epigeous and hypogeous Helvellaceae outgroups and related South American taxa, a resolved multi-gene phylogeny of the Tuberaceae and putative epigeous ancestor of Tuber is presented. A previously unknown South American lineage that contains both epigeous and hypogeous taxa is resolved as sister to the Tuberaceae. Chapter 3 is focused on issues of cryptic speciation and taxonomy within the Tuber gibbosum clade. The four species resolved in the Gibbosum clade appear to be endemic to the Pacific Northwest and associated primarily with Gymnosperms. Chapter 4 is a meta-analysis of all known Tuber ITS rDNA sequences (e.g. from Genbank and generated from herbarium collections) available at the time. These were placed within the Tuber phylogeny to assess species diversity, long-distance dispersal, and host associations. In total, 120 phylotypes were detected (based on a 96% similarity criterion). Tuber shows high levels of continental endemism. I hypothesize that species shared between continents and having low ITS variability (<1%) are the result of recent human-mediated introduction events. Chapters 5 and 6 are focused on the ectomycorrhizal ecology of the economic truffle T. lyonii, which is native to Eastern and Southern North America. There is a phenomenon of Tuber lyonii fruiting in pecan orchards. Pecans (Carya illinoinensis) are in the Juglandaceae, an understudied ectomycorrhizal plant family. I sampled the ectomycorrhizal communities of pecan orchards (associated with the production of the North American truffle species Tuber lyonii). In Chapter 5 I discuss four Tuber taxa discovered in these pecan orchards, their abundance and haplotype diversity. Chapter 6 examines the ectomycorrhizal communities across the five pecan orchards sampled. I show that multiple Tuber species, including Tuber lyonii, are dominant in the ectomycorrhizal community. Chapters 7 and 8 focus on black truffles in the Melanosporum clade. In Chapter 7 I document that Tuber indicum has been introduced into North America multiple times, and through ectomycorrhizal synthesis I demonstrate that this Asian species can associate readily with angiosperm and gymnosperm hosts endemic to North American. In Chapter 8 I describe a quick and reliable method for the determination of Tuber melanosporum. The method is based on direct PCR and species-specific primers and is very useful for rapid diagnostics. I have adapted this approach for other truffle and mushroom species.

Three major findings emerge from my dissertation research: 1) Tuber is more diverse than previously realized; 2) Tuber exhibits high levels of regional and continental endemism; 3) Taxonomic issues remain in many species complexes worldwide (including the Tuber candidum complex in North America, the Tuber excavatum complex in Europe, the Tuber indicum complex in Asia). Taxonomic challenges also remain regarding species known only from ectomycorrhizal or anamorphic states. The discovery of additional Tuber species is expected as the truffle flora of undersampled regions become better studied and incorporated into the Tuberaceae phylogeny.